The RMA is Bad, But Enforcement is Far, Far Worse

Whilst many would agree that the RMA has grown and evolved over many iterations into the hopeless article it is now, what compounds the problem is the ramshackle enforcement by agencies tasked with enforcing it.

Whether it be horrendous costs associated with consents and the interminable delays many experience, the impacts on the environment fair equally badly if not worse.

Be it nitrate leaching, aquatic farming pollution or sediment run-off from the monoculture of pinus radiata. Those bodies we entrust to care for our environment seem driven entirely by the almighty dollar and pursuit of the nonsensical GDP rather than actually doing the job the RMA requires of them.

Of personal knowledge to me are the antics of the Wellington Regional Council. I say antics, as they are is some situations “the fox in charge of the hen house”, in that they not only enforce environmental standards on others, but they themselves manage large tracks of forest, both native and exotic.

Originally taken under the Wellington Waterboard Act, much of the area was planted in pine simply to stabilise the hill-country and protect a future water catchment. At its inception in the late ’80s, WRC inherited these tracts of land and are still mandated to preserve their future water catchment purposes.

However, in the late ’90s or early ’00s, WRC elected to begin operating the pine forestry as a commercial concern. Unfortunately, the pines they had at their disposal were of very poor quality commercially having had no silviculture during their growth, they were riddled with knots. Not to be deterred, WRC began a sequence of clear-felling and replanting.

Now a few years ago, WRC sold off the cutting rights to their pine forestry, they nonetheless remain as overseers of the environmental impacts of those new owners. Sadly, a blind eye is turned to oh so many breaches of the RMA in remote areas of the forests well away from prying eyes. 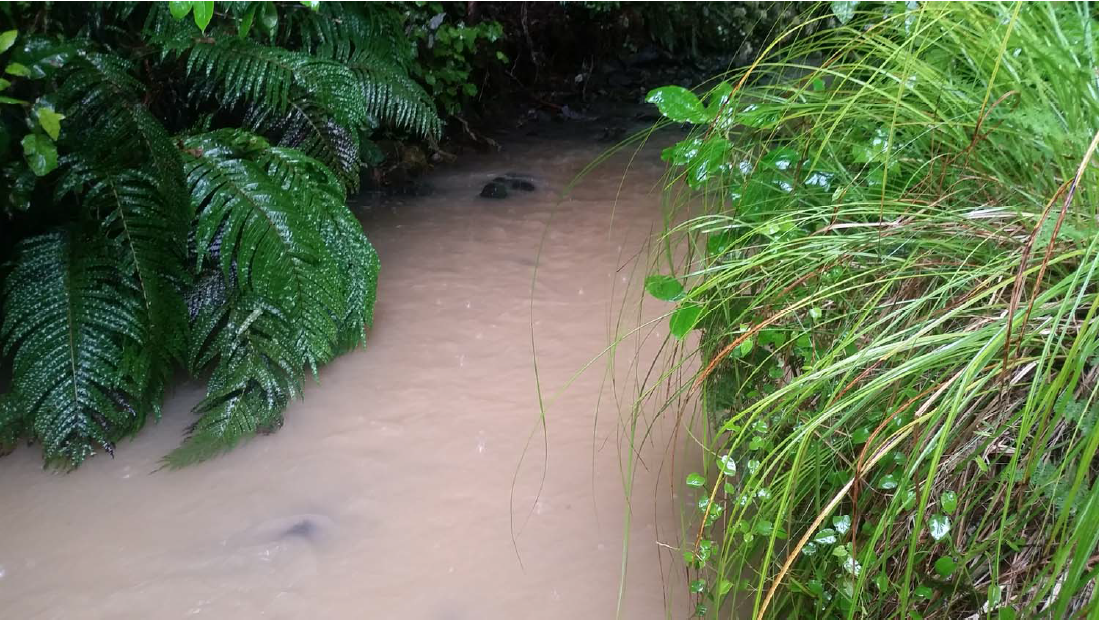 Well before WRC sold off the cutting rights to the pine forests, they operated them commercially themselves. The environmental impacts created by WRC, under WRC control (and as upholders of the RMA) was appalling. In one incident in 2014, WRC contractors allowed trees to fall across a pristine stream, ”The Wainui”, a tributary to the Whakatikei River – a renowned trout stream – or it was before WRC began their combined assault of logging and 1080. Nothing seems to have survived that. 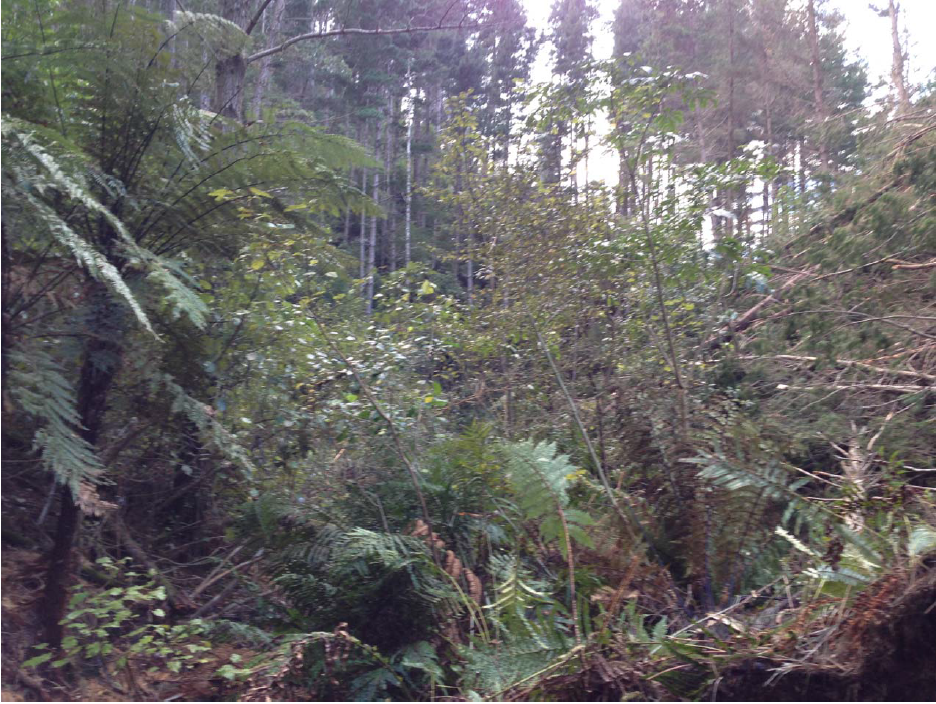 Yep, There’s a Stream Under There

This was done BY WRC, controlled BY WRC, sanctioned BY WRC, and met environmental standards enforced BY WRC.

In the years since, despite complaints to officers, attendance at subcommittee and full committee meetings, nothing happens. Council cannot say they are unaware. They have been told officially time and again of the absolute devastation wrought in their name, but as this is such an isolated location it doesn’t seem to matter.

Now many may not be aware, but clear-felling larger forests requires a consent from a Territorial Authority. In this case, WRC has to approach Upper Hutt City Council (UHCC) for consent before they can begin any operation. These applications result in a Forest Harvest Notice (FHN) granted for specific locations and time periods. It can detail what is and what is not allowed including environmental, roading, operational hours, etc.

UHCC issued many FHNs to WRC over the years, and asking for copies wasn’t that easy as no-one seemed to know exact locations or operational areas. But UHCC did supply several relevant FHNs for me to peruse.

It was eye-opening to read some of the conditions imposed on WRC by UHCC.

In Particular, these extracts from the FHN (emphasis by author)

“All land clearance works shall be undertaken in a manner so as to prevent adverse affects on natural waterways and down stream properties. Riparian strips at least 20 wide on each side of any gully or permanent flowing waterway shall be maintained where the existing growth is native bush or trees, and where the gully is not to be immediately filled over as part of controlled earthworks. All works shall satisfy all relevant Regional Council Plan.

Removal of small parts of native riparian strips for access and stream crossings may be approved where it can be shown no reasonable alternatives exist.”

3.1 Tree felling shall be carried out to minimise the risk of slips. This particularly applies near watercourses and if such watercourses become blocked, it is the responsibility of the applicant to immediately clear the waterway.

3.2 The contractor shall put in place adequate measures to control silt and debris that could be washed off cleared areas into adjacent watercourses, culverts under public roads & accessways and downstream storm water pipelines by constructing and maintaining silt/ debris control structures. These measures are to be maintained by the contractor until the measures as set out in 3.3(ii) below are established.

3.3 Following completion of the logging operation the site area shall:

(i) be cleaned of debris to prevent any washing down and blocking watercourses, pipelines or culverts.

(ii) either be replanted and/ or hydro seeded to provide protection from erosion and high storwater runoff.

3.4 Existing watercourses are to be maintained to their full capacity during logging operations.

It is also noteworthy that legal roads run alongside the Wainui Stream and the operation not only blocked these roads, but they remain blocked to this day.

The idea of mitigating slips also seems lost, as does clearing debris and replanting. 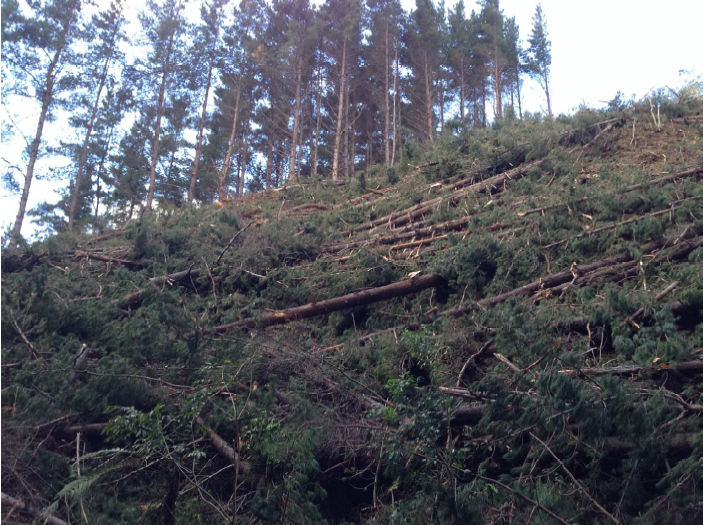 An Unstable Hillside Covered in Slash

So what do WRC do about this, now 6 years later? Nothing!

In other more enlightened Regional Authorities, where there is no conflict of interest, prosecutions have been swift. 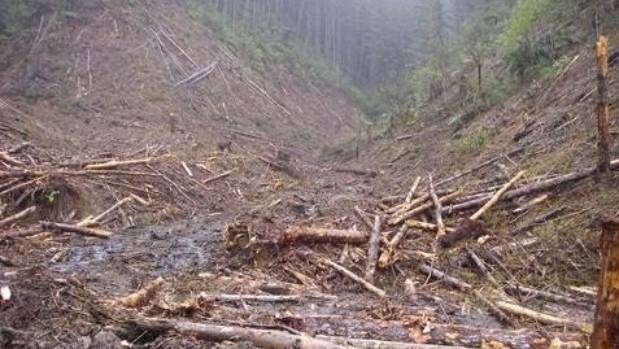 The fines relate to a pine forest south-east of Ōpōtiki.

$57K is probably a trifling amount to a large forestry operation, but it does send a message. Yet how does that compare?

On the left BoP Regional Council prosecution, On the right WRC business as usual

Last year, WRC chose to prosecute a motorsport club for holding an event where vehicles crossed a small stream. They placed straw bales across the stream to prevent any possibility of silt dispersal and reported none actually happened. Yet simply because they had not applied to WRC for a consent, they were pilloried before the Environment Court, and despite pleading Guilty were fined $60,000 – compare a small club of about 25 members to a logging operation – doesn’t seem equitable, does it?

Our information is that over 150 consents exist on that stream allowing landowners to disturb the stream with impunity, some extend for 10 years. The Club was fined simply because unlike the other 100 or so, they didn’t complete the paperwork.

But WRC is not alone here, we can equally pick on say Marlborough or ECan. But that’s for next time.

PS, a formal complaint by Public Access New Zealand is at https://publicaccess.nz/formal-complaint-to-greater-wellington-regional-council/