Posted on 04-05-2021 by Guest
Extracts from Dave Richardson’s book “With Few Regrets”
In 1959, Dave was working on NZ Forest Service 1080 drop in the Hokitika catchment, Southern Alps and did a post-1080 drop field survey:-
“We went into the bush looking for dead animals after a 1080 drop and found a few, along with many dead birds.— “
Some days later after heavy rain they continued to search.
“Once the weather cleared we found a lot more dead deer from poison and many more dead birds.  — – Tom and I were detailed to Hammond’s Creek tent camp to look for dead animals, then to hunt around down around Mudflats, which we did for a few days. We found a few dead possums, one or two deer and many birds. The 1080 that had been flown on was killing everything and this concerned me. We found cicadas and many bush dwelling insects like weta and bugs, all dead.”
Further on Dave and Rick Stent find kokaho in a Fiordland valley.
“Several times we had these black birds fly under the machine (helicopter)—-We wondered what sort of bird they were as they had short wings and  big tail—-Rick Stent came up with idea they were kokako—-sure enough the characteristics soon showed up, they were kokako. They were dark and did most of their flying as a fast glide.”
I said  ‘Whatever you do don’t tell the (Fiordland) Park Board, otherwise they will shut this area for hunting for us, then they will put some stupid programme in place that will spell the end of these birds.”
If anyone deserves the right of rediscovering the kokako, it is Rick Stent. But then what did DOC do, but 1080 the area – goodbye kokako!”
Footnote: “With Few Regrets” by Dave Richardson (self published) Price $60 plus $8 postage, total $68. Available from author, 9 Beatrice Place, Rarangi, Blenheim R.D. 7273. E mail contact <wekarich@xtra.co.nz> Payment by direct credit. 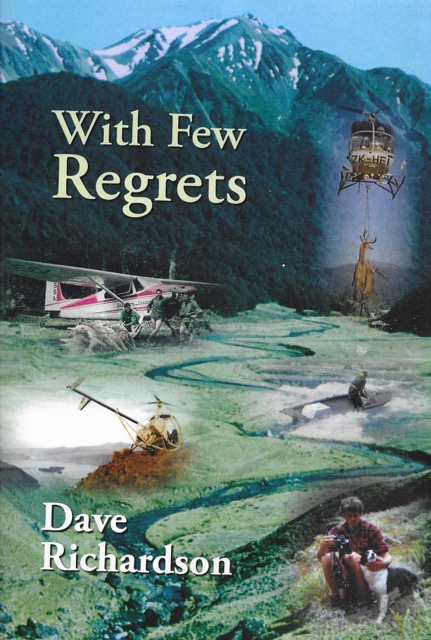