Release by Campaign Against Foreign Investment in Aotearoa

Below is the executive summary of Ed Miller’s exhaustive and much appreciated work on updating CAFCA’s annual Key Facts.

The full details (both in text and graphs – Powerpoint and PDF) are on CAFCA’s Website at: http://canterbury.cyberplace.co.nz/community/CAFCA/key-facts.html

This is the second year that I have supported CAFCA by updating this foreign investment information, work that was previously performed by Bill Rosenberg. This time I endeavoured to complete this much earlier in the year, however there were numerous delays from agencies in publishing data compared to previous years. In most instances this data is current to March 2021. Any errors are of course my own.

– Foreign direct investment (ownership of companies) increased $10.8 billion to $140.6 billion in the year to March 2021, a more than ninefold increase since March 1989. NZ ownership of overseas companies is only $39.1 billion, meaning a net liability of $101.4 billion.

– While the overall scale of foreign investment remains unchanged at $481 billion, foreign investors share of NZ net wealth declined 5% to 18% in the year to March 2021. Here we can see the impact of covid-related monetary policy, with rising asset prices resulting in a half-trillion dollar increase in total net wealth, including a $215 billion increase in the value of owner-occupied housing and land, a $268 billion increase in household wealth and a $42 billion increase in Government net worth. This 24% increase brought total wealth at March 2021 to $2.63 trillion. It will be interesting to see whether tighter monetary policy and declining asset prices have the opposite effect in next year’s data.

– In the year to December 2021 the OIO (Overseas Investment Office) approved $19.6 billion in new investment, the highest amount since 2006 and almost double the average figure for the last decade.

– In the year to December 2021 the OIO approved the sale of 25,863 hectares of freehold rural land to foreigners. While this is higher than 2020 it remains well below the trend from the last decade, in which the average was 113,036 hectares. The sale of 47,156 hectares of leases, forestry cutting rights and other major interests in land approved in the year to December 2021 was also well below the average from the previous decade.

– The financial and insurances services sector (including the big four Australian owned banks) accounted for $51.2 billion (39.1%) of foreign ownership in the year to March 2021, followed by manufacturing ($16.9 billion).

– Almost one in every two dollars that left New Zealand in the year to March 2021 went to the owners of New Zealand banking sector: $7.1 billion out of $14.4 billion.

– Employment in foreign owned enterprises fell almost a percentage point in the year to March 2021, down to 17.2%. 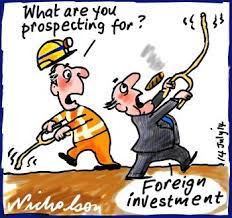