Posted on 25-01-2022 by Guest
Media release regarding the latest Collaboration between the Fiordland Wapiti Foundation, Department Of Conservation, and the Game Animal Council.
Media Statement  24 January 2022
A deer management project jointly developed by the Department of Conservation, Fiordland Wapiti Foundation (FWF) and the Game Animal Council is about to get underway in Fiordland National Park.
Designed to supplement existing management programmes, such as that annually undertaken by the FWF, this new project is intended to partially address the gap left by the reduction in wild animal recovery operations (WARO) due to depressed wild venison prices.
“Management will occur at locations to the west of the Murchison Mountains and south of the established wapiti range,” says DOC’s George Ledgard. “Monitoring in these areas indicates that with less WARO in recent years, work is needed to reduce deer numbers and protect sensitive alpine species such as the mountain buttercup and Fiordland mountain daisy.”
“Importantly the project will help maintain the high conservation values of both the Murchison Mountains, home of the takahē, and Secretary Island, Fiordland’s largest deer free island, which is within swimming distance of the mainland.”
“The buffer control work, which will also protect the wapiti area from incursion by red deer, is being partially funded by the FWF and it is hoped that some of the deer close to the wapiti boundaries will be recovered,” says FWF President Roy Sloan. “Specifically targeting around 300 females – the breeding animals. The project will also support the local helicopter industry that has been heavily hit by both the downturn in tourism and wild venison prices.”
The nearly 20-year partnership between DOC and the FWF, that includes game animal management and pest control programmes, has helped protect vulnerable native species while achieving a lower-density, high-quality wapiti herd prized by recreational hunters.
“The development of this programme and the ongoing collaboration between the hunting sector and DOC in Fiordland is a model for progressive game animal management in New Zealand,” says the Game Animal Council’s Tim Gale. “It is also an illustration of how well-planned management benefits both conservation and hunting with the reward being better hunting in an improved ecosystem.”
The programme is due to get underway during the next period of stable weather and will run over the next few months.
Wapiti, also referred to as elk, are the largest species of round horned deer in the world. The Fiordland herd is the only free-range wapiti herd in the Southern Hemisphere.
Contact: Roy Sloan, President, Fiordland Wapiti Foundation
Phone: 021900423
roy.sloan@ravensdown.co.nz 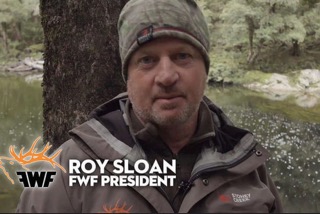