Posted on 13-04-2020 by Guest
by John McNab
Fears of wild deer numbers getting out of control have no practical foundation says a hunting and conservation lobby. West Coast conservationist  Laurie Collins spokesman for the Sporting Hunters Outdoor Trust, said talk of wild animal explosions were fundamentally flawed in terms of the deer as an animal species and ecological reality.
“Logic suggests strongly, as deer have only one fawn a year – and some don’t survive – a deer population explosion was improbable, given sound game management,” he said.
Fears of vegetation damage by deer were groundless.
Laurie Collins said New Zealand’s vegetation was naturally adapted to browsing as it had evolved over millions of years under strong browsing pressure from birds such as moa.
His comments were prompted by a Stuff article entitled “Roar ban won’t cause deer boom” written by Fairfax’s Will Harvie.
“Scientists don’t expect deer numbers to explode after hunting was banned due to coronavirus. April is normally the busiest month for deer hunters, as they take advantage of what’s known as the Roar”, wrote Will Harvie.
Laurie Collins said the article concluded with a clumsy metaphor about a person in a pantry, eating the most palatable food, which was likened to wild deer eating the more palatable foliage.
“It’s fundamental in the case of wildlife such as deer and possums and even some birds which are vegetarian browsers,” he said.
Composition Change
A browser simply modified the composition of the overall vegetation to numerically more unpalatable species as palatable species were browsed. Less palatable species meant lower carrying capacity for the browsers.
“In this way Nature establishes equilibriums of low to moderate numbers in browsing species, animals and birds,” he said. “It’s simply the finite carry capacity of the habitat.”
In 1994 a Landcare Research scientist Graham Nugent told a DOC “Possum Pest Workshop”  that “possums do not threaten total (national) deforestation – for the bulk of New Zealand’s forest, the process is one of compositional rather than structural change.” New Zealand’s vegetation evolved over millions of years under strong browsing by several flightless moa species and canopy browsers such as pigeon (kereru), kokako and others.
“Deer browsing is similar, if not exact, to moa browsing,” said Laurie Collins. “ So there’s no need for panic.”
He said deer did undergo a population explosion probably in the 1930s when acclimatisation societies warned the government the need for deer management and harvesting of hinds in the late 1940s because of excessive numbers. The peak in deer numbers was to be expected as it was a standard pattern for deer after liberation in the late 19th century to increase in numbers and reach a peak and then “crash” to a moderate, stable or even low level.
Classic Study
Scientist Thane Riney’s 1950s classic study of a deer herd at Fiordland’s Lake Monk, a herd which had never been hunted, showed the reality. The scientific team found evidence of once high deer numbers that had naturally dropped to a low level.
Laurie Collins said efforts to exterminate deer as had been policy by Governments since the infamous “Deer Menace Conference” of 1930, were doomed to failure while wasting an animal resource and costing the country vast sums of money in a fruitless exercise.
He said while working for the New Zealand Forest Service in a West Coast valley during the 1960s, deer shot by cullers were analysed. The vast majority of deer were immature animals with the more cunning older breeding stock generally eluding cullers.
“Trying to drastically lower numbers only results in Nature bouncing back,” he said.
He said a more graphic example was the efforts of the Department of Conservation and ill-conceived policies like Predator Free NZ 2050 trying to exterminate rats with poisons.
Rat’s Success
“Rats are the success story in terms of reproductive ability,” he said. “Research has shown after 1080 poison, the 20 percent surviving rats explode back in numbers and you end up with three times pre-poison rat numbers. “
While deer have just one fawn a year, a female rat could start be pregnant at five weeks of age, have five or so litters in a year with about eight in a litter – about 40 more rats per female in just 12 months. The rat explosion then resulted in an explosion of stoat numbers preying on rodents.
“It’s senseless and thoughtless disruption of the food chain and predator-prey relationships.”
Laurie Collins said DOC seemed to have an inability to understand basic predator-prey relations and Nature’s ways.
“Deer are not rabbits or rats in terms of reproduction. A one month hunting ban would make no difference to the New Zealand wild deer population whatsoever,” he said.
© A handsome red deer stag in the autumn “roar” 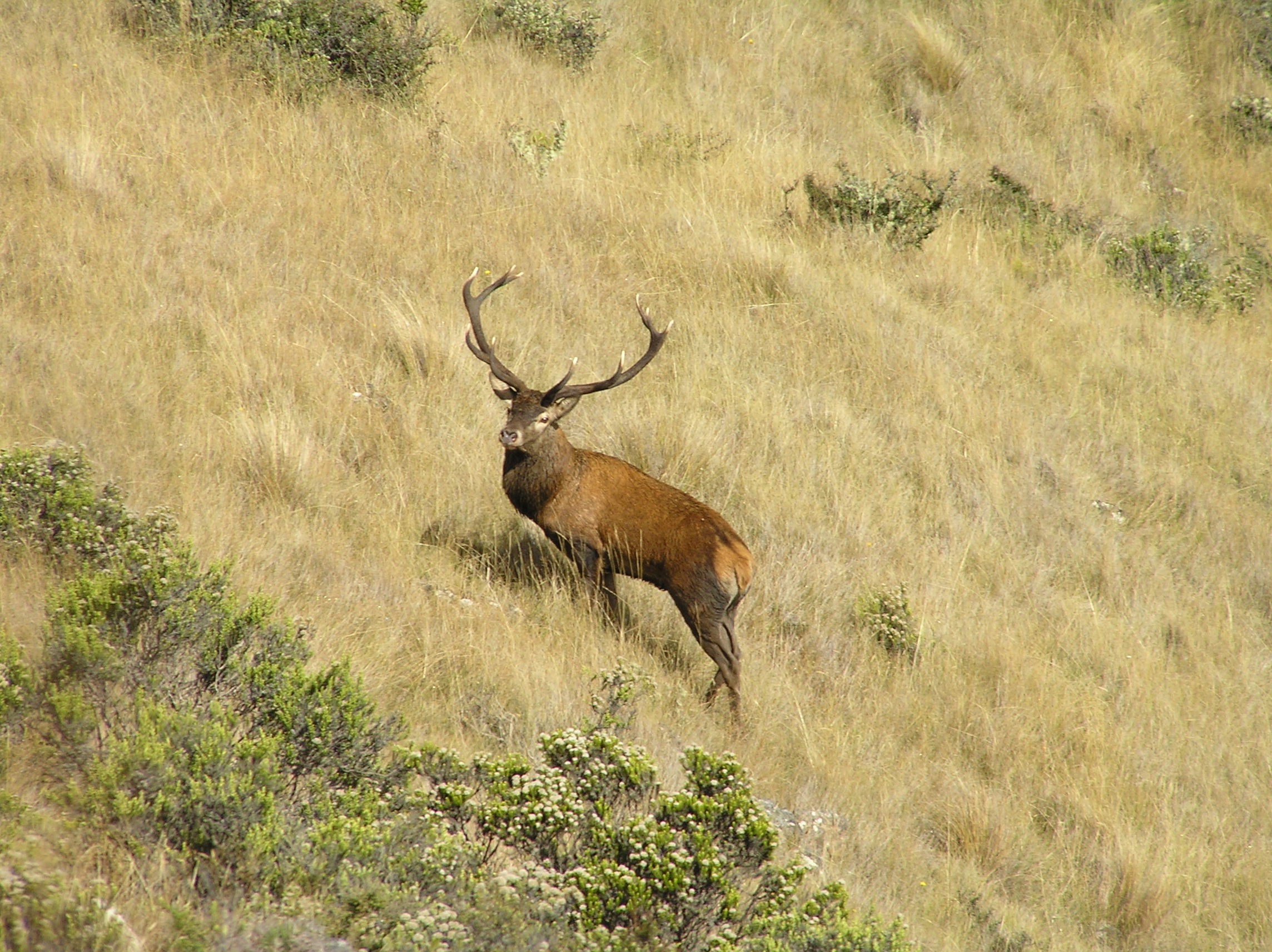