Posted on 21-08-2020 by Guest
Opinion by Stewart Hydes
Secretary Council of Outdoor Recreation Assns.
The publicly funded Department of Conservation has embarked on a senseless, wasteful, destructive series of mega-1080 poison drop. Under attack are the ecosystems of places like North West Nelson, Nelson Lakes National Park, Tararua Range Forest Park, Wet Jacket Arm Fiordland National Park and others.
Government stands limply by as did the previous National government and the media lack the intelligence to ask questions and even attempt some semblance of investigative journalism.
Cabinet Ministers like National’s Nick Smith and the current Conservation Minister Eugenie Sage stridently laud 1080.
I find it absolutely, unequivocally astounding – totally beyond adjectives – that here we are, in a modern democracy – and such an ideologically-driven, economic and environmental rort is being allowed to occur.
Those of us who knew the wilderness and outdoors first hand, believe we can see through it – yet we seem so utterly powerless to do anything about it.
Seemingly, we have no choice but to stand by – whinging and snivelling – while, amongst other things:
(1)  taxpayer money is poured down the drain, in seemingly ever-increasing quantities;
(2)  non-target species, acknowledged to be sentient, and protected by law from cruelty in all other contexts, are cruelly slaughtered by the slow-to-kill toxin, in truly vast numbers – admitted to be up to over 90%, in some cases.
(3)  protected native species .. including such incredible marvels as Kea (the world’s only true alpine parrot, and arguably its most intelligent bird, with the problem-solving capability of a 4 year old human child, chiefly among them, also cruelly fall victim to what is ironically ministers and bureaucrats purport to be their saviour while admitting 1080 kills up to 50% of locally-affected populations at least, in some cases.
Even our critically endangered takahe are not safe, so it seems, but outdoors people knew that.
Chemical Pollution
For what we are witnessing is surely the world’s worst example of deliberate, indiscriminately aerially-applied, state-sponsored, environmentally, financially and socially disastrous, chemical pollution, on a truly massive scale – thousands of tonnes of food-imitating baits laced with a WHO Class 1A toxin – across millions of hectares – currently occurring, across the public’s lands.
Incompetent Media
And yet the mainstream media are almost apparently impossible to get interested in even airing the story!
And all for a short-term, at best, population reduction of certain targeted species (if you call a sledgehammer to crack a single walnut sitting atop a pile of walnuts “targeted”) in pursuit of an ideological yet impossible goal – that it would take a conservatively-estimated $1.6 trillion to achieve – on the roughly 8 million hectare public conservation estate alone.
Yes .. truly, unequivocally astounding.
Editor’s Footnote: 1080 was developed in the 1920s as an insecticide and was then found to kill anything that breathes [USES] oxygen and consumes the poison bait [in sufficient quantities. It is a metabolic toxin]. The creature’s carcass remains toxic so any other creature scavenging it is poisoned too. The manufacturers recommend strongly burying carcasses but the poisoners in New Zealand ignore this. It has been described – accurately – as an ecosystem poison. 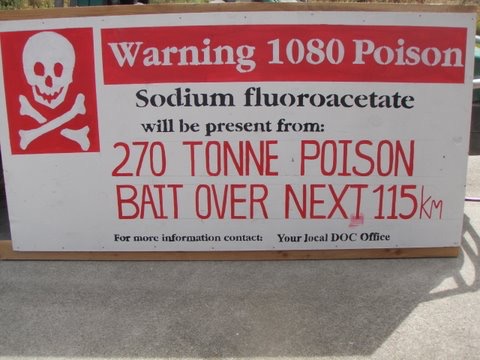