Government Fails to See the Wood on Terrorist Acts

Posted on 17-09-2021 by Guest
Opinion by Rupert Pye
It was sort of deja vu – a feeling of familiarity – when Prime Minister Ardern told New Zealanders that the government did everything they could to prevent the New Lynn Countdown stabbings by an Isis terrorist.
The reality was government blundered just as it did with the March 15 (The Ides of March) 2019 terrorist act on the Muslim people at the Christchurch mosque.
The deja vu doesn’t end there.
In the 2019 atrocity the terrorist Brenton Tarrant was an Australian. The police granted him a firearm licence despite glaring irregularities in his application. Reportedly he applied in Hamilton when resident in Dunedin. He had no proper referees, only a couple of on-line contacts and reportedly he was under surveillance by Australian authorities.
And he was not a New Zealand citizen.
Less than a month after the mosque shootings, New Zealand’s parliament voted by 119 to 1 on reforms banning semi-automatic sporting rifles as well as parts that could be used to build prohibited firearms. Only ACT’s sole MP, party leader David Seymour voted against the absurdly rushed law.
The government offered to compensate owners of newly-illegal firearms in a buy-back scheme. It was ill-conceived law, rushed through a parliamentary select committee in the blink of an eye. Reportedly over 12,000 submissions were read and considered in just two days, arrogantly defying credibility and also defying and defeating the very basic principles of democracy.
The “over-night” new law achieved nothing – in reality, it achieved the opposite. Gangs were offering owners of the newly illegal firearms, double the price government would pay. So the end result was targeting the law-abiding firearm owning public while gangs were able to add to their arsenals.
Reiterating, Tarrant was not a New Zealand citizen.
Nor was the terrorist in the recent New Lynn supermarket stabbing named in court documents as 32-year-old Ahamed Aathil Mohamed Samsudeen, a Tamil Muslim from Sri Lanka who arrived in New Zealand 10 years ago on a student visa seeking refugee status. He was granted the visa in 2013.
Not New Zealanders
Like Tarrant he was a foreigner and who prior to the New Lynn attack had been under surveillance for many months.
But the Prime Minister arrogantly side stepped government incompetence and responsibility by conveniently not telling the public the full story.
As one commentator explained, “she then went on to say that the High Court refused to convict and imprison him on planning a terrorist attack. What she didn’t say however was that the High Court Judge who made that decision (in July 2020) was so concerned that the law was inadequate (because planning a terrorist attack was not an offence in New Zealand and wouldn’t allow him to imprison this man) that in a rare move he requested High Court staff to send his judgment to the Attorney General, the Solicitor General and the Law Commission with this advice.  That was in July 2020.”
Fourteen months ago the Judge warned there was a potential serious threat to public safety from “lone wolf” attacks following the 2019 Christchurch terror attack. And that was exactly what the New Lynn terrorist did.
The warning was given to government over 14 months ago. But the Prime Minister, Police Minister and Cabinet sat on their hands and failed to heed the judge’s warning.
Simple Law Change
All that was needed was a simple addition to current law that could have been made in a month and moved into law under urgency.
Where was the president of the Police Association Chris Cahill, so shrill and strident in demonising the law-abiding firearm owning public following the mosque tragedy?
Government can move  with blinding speed even riding roughed over democracy when it suits as it did following the Christchurch mosque tragedy. Australia and the UK already have this “planning a terrorist act” legislation and New Zealand could simply have adopted their wording. As the commentator said “Labour had the numbers to do it alone even though there would be no objection from National and Act for tougher terrorist laws.”
Reportedly police had some 30 officers involved in surveillance on the one person Sri Lankan.
“This is absolutely absurd they had to do this because the required law change had not been made. Having 30 Police involved in watching this man 24/7 meant they totally believed he was planning a terrorist act.”
To recap, both the terrorists were not New Zealand citizens.
Government incompetence allowed the tragedies to occur by (a) wrongly granting Tarrant a firearm licence and failing to check his background and (b) not urgently updating the terrorist legislation to enable the deportation of 32-year-old Ahamed Aathil Mohamed Samsudeen who was clearly seen by the judge as a very real potential threat.
Government and PM Adern failed to see the wood for the trees.
The outcome was the 2019 Mosque massacre and the 2021 New Lynn supermarket knife attack which together resulted in loss of life and severe long term injuries.
© Australian Brenton Tarrant – somehow he was granted a NZ firearm licence.
Photo Reuters 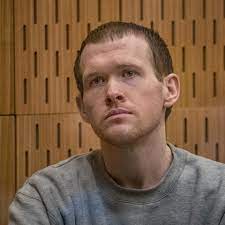