The Council of Licensed Firearm Owners (COLFO) annual survey of members for 2021 shows that while confidence in Police ability to administer firearms laws is low, the unhappiness is with the system, not individual officer’s general conduct.

COLFO spokesperson Hugh Devereux-Mack says that while there had been very slight improvements compared to the survey last year, the overall picture was that licensed firearm owners have no confidence in the correctness, fairness, and good sense of Police in administering the Arms Act.

Key findings of the survey include:

·         The highest levels of confidence among licensed firearm owners (LFOs) were for matters requiring Police officers to make judgements. Confidence in the competency of staff met by LFOs was 4.3 out of 10.

Devereux-Mack says the low confidence is due to the Police maintaining control of firearm licence matters despite a promise by the Labour Government they would not, ‘punitive’ new laws, and current delays of over 12 months waiting for a firearms license to be approved.

“Licensed firearms owners continue to be treated by the Police system as criminals or dodgy, not ordinary citizens who share the desire to use firearms safely. This is despite being deemed fit and proper persons following vetting by police.”

“Licensed firearms owners have seen broken promises from the Government, a firearms buyback that did not make New Zealanders safer, Police misinformation and safeguarding of firearm statistics. It’s not hard to explain why they’re unhappy.”

The most concern firearms owners had was the new administrative structure that has been set up as a unit within the Police. Confidence in the new system scored a miserable 1.7 out of 10.

“Establishing a new regulatory unit inside the Police structure breaks the Government’s promise to provide an independent authority under the Arms Act Amendment 2020 and institutionalises the discrimination of licensed firearms owners” says Devereux-Mack.

“The Government shoulders a large portion of the blame for licensed firearms owners’ distrust of Police after what it has put them up to.”

He says the new structure will make an already broken system irreparable.

“It’s throwing cement on 12-month delays and 38-page application forms. Staff are already underpaid and burnt-out because Police do not have the resources to manage the administrative task, but they keep adding more rules regardless.”

Renewing an NZ passport takes 10-20 days. There are several million passports held by New Zealanders. A standard firearm license renewal is now taking up to 1 and a half years, and there are barely a quarter million licensed firearms owners.

“Imagine if we saw the same delay when renewing drivers licenses. If, despite following all the rules, you were unable to own or operate a car while police were failing to process your paperwork for more than a year, you can imagine how law-abiding firearms owners feel.”

“An independent authority would be dedicated to the task and better equipped to manage the system, while laws would be enforced by Police as we see with Transport. It’s not about control, it’s about accountability” says Devereux-Mack.

However, increased member confidence in the work of Police staff shows that misgivings are not with those on the ground.

“It’s not personal. Licensed firearms owners are relatively happy with the conduct of Police staff in carrying out checks and interviews. Many Police officers are professional and good to work with” he says.

“It is the system that is letting them down, creating distrust not towards the officer conducting the check, but what they have been tasked with doing.”

“After consistently breaking promises, the Government and Police authorities are undermining the work being done by their staff in the field, who know maintaining good relationships with licensed firearms owners is highly conducive to the safety of our wider communities.” 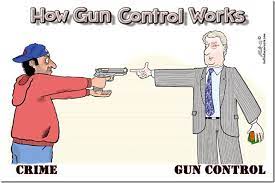 5 Responses to Licensed firearms owners to Police: “It’s not personal.”