Posted on 14-07-2021 by Guest
Special report
A PhD thesis in biological sciences at the University of Waikato has highlighted the adaption of New Zealand’s vegetation to browsing first by moa over a period of millions of years and more recently by wild deer and other wild animals over the last 150 years.
Genetics research by Kevin Maurin recently investigated the evolution of New Zealand plants.
An oft-debated feature has been divaricate plants. Divaricates are mostly shrubs or low trees, very twiggy and often with basket-like entangled structure. Overseas the habit is called “cage architecture”.  About 13 per cent of New Zealand woody plant species are divaricates, a much higher percentage than anywhere else.
Early European scientists came up with two theories.
The first held that divaricating was an evolutionary response to browsing by moa birds. The second theory was divaricates are an adaptation to climate.
It seems now both are valid factors.
Kevin Maurin doing his PhD thesis in biological sciences at the University of Waikato, showed that divaricating probably began about 5 million years – not very long in terms of science’s evolutionary time scale.
Five million years ago, NZ was colder and drier thus suggesting climate played a strong role. But moa had browsed shrubs and small trees for much longer than 5 million years ago.
Deer browsing
It was noted that “divaricates are browsed these days by wild deer, but that pressure probably won’t lead to widespread loss because deer, like moa, get better nutrition from other plants”.
Laurie Collins of the Sporting Hunters Outdoor Trust said the findings showed that NZ’s vegetation evolved over millions of years under intense browsing.
Though the several species of moa were the principal browser, there were many others herbivore birds including the extant kereru (pigeon) and paradise shelduck, the kakapo and re-discovered takahe as well as many extinct geese and flightless ducks that have been overlooked as herbivores.
Defences
“Naturally over millions of years, vegetation adapted with defensive mechanisms such as divarication,” he said.
He noted at an ecological seminar in 1986 (Moas, Mammals and Climate Change”) several scientists spoke of browsing.
For example, two scientists (Clout and Hay) in a joint lecture, said “browsing is not new to the NZ flora —browsing habits of animals (e.g deer) are not
too dissimilar from those of lost avi-fauna (moas and others), natural soil and water values might not be comprised, were animals left to achieve stable populations.”
Laurie Collins said browsing was undoubtedly an important part of New Zealand’s ecosystem functioning whether by deer or birds.
© Several million moa of several sub-species browsed NZ vegetation for about 50 million years. 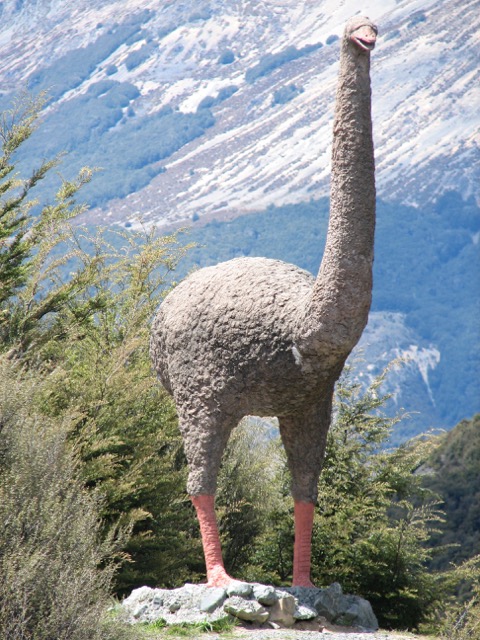