There are Crackpot and Credible Conspiracies

Posted on 30-08-2020 by Guest
By Tony Orman
Conspiracy theorists proliferate in a time of crisis as in covid 19, recently wrote a columnist Max Boot in the “Washington Post.”
When people despair, they often seek solace either in mainstream religion or in less organised, more extreme faiths. Conspiracy theories always flourish in a time of troubles” he wrote.
Max Boot is correct – well to a degree. He wrote “Every great disaster of the past century has brought forth conspiracy-mongers. They claimed that World War I was started by arms manufacturers, a.k.a. “merchants of death”; that Franklin D. Roosevelt goaded Japan into attacking Pearl Harbor and knew all about it in advance; that homegrown traitors “lost” Eastern Europe and China to communism; that the military industrial complex assassinated John F. Kennedy; that the crack cocaine epidemic was started by the CIA; that 9/11 was an “inside job”; and that George W. Bush invaded Iraq to help Halliburton.”
But he is also too dismissive of conspiracies.
Recently on a drive to a trout river with a fellow angler and chatting on political subjects, as Bill and I are wont to do, I said that conspiracies have always happened. Man conspires undeniably.
Look at Julius Caesar and Brutus I suggested.
Bill replied with a laugh, “Conspiracies happened before that. Look at Adam and Eve!”
“And how about the last supper and the betrayal by Judas? Surely that was about plotting and conspiring?” I replied.
Here in New Zealand and on outdoors subjects as pertaining to the Council of Outdoor Recreation Association of NZ’s website, I suggest a few examples.
Political Donations
For instance, donations by corporate fishing companies hit the headlines and with respect to NZ First and key MPs receiving handsome donations. Is that not a conspiracy, i.e. corporates conspiring to make donations in order to gain favours from a forthcoming government?
Indeed I have been told that the corporate fishing companies donate to as many political parties likely to be in the forthcoming government as possible, in order to get favours over the next three years.
Is this true? I don’t know.
But I suspect it cannot be dismissed until everything is laid out for public scrutiny. And probably that would never happen. Are not “coverups” conspiracies?
So political donations are a calculated plotted move, designed to benefit – usually financially –  the donor down the track.
My dictionary defines “conspire” as “to plan secretly” and “conspiracy” as “a plot.”
Do fisheries company donations come into that?
Or do venison recovery helicopter operators lobbying government, departmental officers and cabinet ministers for access to exploit for private profit the public’s game herds.
Do departmental spin doctors plot their next move to thwart public opposition to the department’s polices or campaigns?
Rushed Firearm law
The horribly rushed firearm laws following the tragic “Ides of March” massacre by Australian Brenton Tarrant at a Christchurch mosque resulted in undemocratic move by government. I suspect that the anti-firearm lobby ideologues saw it as a grand opportunity to push their extreme views. Government panicked and the parliamentary select committee claimed it read 13,000 submissions in two days.
The issue wasn’t so much firearms or the type of firearm, but the complete and alarming lack of democracy.
How about a corporate electricity generation company scheming to get government approval to dam  the public’s top trout rivers?  It all involves scheming, plotting, lobbying to get approval and may involve even secret deals, even unethical and even unlawful.
It’s not unheard of.
The point is vigilance then peaceful but strong assertive public opposition may be the only way to defeat the schemed proposal. Politicians care about numbers, i.e. votes. Votes are their lifeblood.
Yet as Max Boot opines, it is no surprise that there is now an epidemic of coronavirus conspiracy theories. The virus was said to have been started by a Chinese biological warfare laboratory, the U.S. Army, Bill Gates or a “globalist conspiracy to establish sweeping population control” — and it is said to be spread by 5G towers.
There’s no doubt nowadays, conspiracy theories are spread more efficiently by social media than by previous communications media. Some crazy theories deranged claims can gain an audience.
The Stark Reality
The reality is there are crackpot conspiracies and credible conspiracies.
Just be aware and vigilant. I wrote in my book “Trout with Nymph” published 1974 that relative to the trout fishing, “read the fishing books and articles—read, analyse, reject or accept. Judge for yourself.”
It applies to anything and particularly today.
Don’t be naive. Just be vigilant and open-minded. Remember human nature with its tendency to lusts for power and/or money.
Even be cynical of the integrity of the exploiters and of politicians.
Remember “The price of freedom is eternal vigilance.” as Winston Churchill once said. 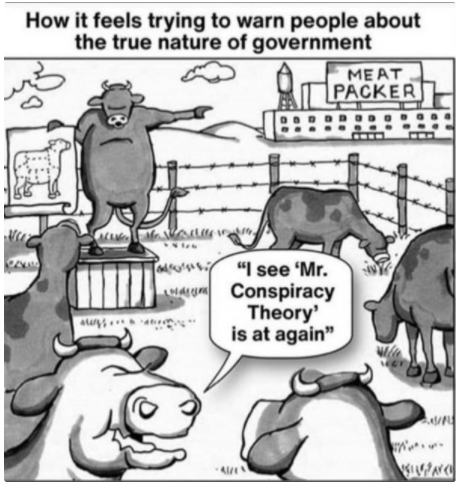 4 Responses to There are Crackpot and Credible Conspiracies