World Rivers Day designated for Sunday 26 September, should be renamed ‘Rivers’ Shame Day’  according to the New Zealand Federation of Freshwater Anglers.

Federation secretary David Haynes of Nelson, said in New Zealand, politicians, regional councils, so-called expert witnesses, independent hearing commissioners and courts, past and present, have all colluded to prioritise industrial scale abstraction and pollution of the public’s freshwater resources, over their protection and restoration.

“The current government’s 2017 manifesto committed it to ‘Take the first steps to clean up rivers and lakes’” he said.

Labour’s 2020 election pledge was to ‘continue to improve the health of New Zealand’s freshwater and coastal areas. (We) will focus on stopping further degradation, making immediate improvements, and reversing past damage to bring our freshwater resources, waterways and ecosystems to a healthy state within a generation.’

“Well, none of that has happened and it is business as usual with large scale irrigation schemes, such as the Mayfield-Hinds-Valette scheme being given renewed consents, despite the evidence that they have being spewing nitrates into our rivers and groundwater for a decade.”

The whole freshwater mismanagement debacle has, and continues to be, founded on the principle of commercial interests purchasing ‘independent’ experts to declare no harm will arise from their proposed dam, irrigation scheme or pollution discharge proposal.

“We have spent nearly fifty years in these David and Goliath battles where those who seek to profit from taking and polluting New Zealand’s freshwater resource pay lawyers and expert witnesses to support their schemes whilst non-government orgnisations (NGO’s), such as ourselves have no equivalent funds to counter in a fair and equitable way,” said David Haynes.

Proposals such as the Three Waters Reform fail to address root cause and will simply add layers of unaccountable bureaucrats to establish and manage an infrastructure company that will be ripe for privatisation in the near future.

Planting trees and fencing waterways is an equally unrealistic response to restore New Zealand’s rivers whose flows have been over abstracted for irrigation, whose source aquifers have been grossly polluted by industrial farming, whose channels are choked with slash and sediment from plantation forestry, and whose braided beds face ecocide from councils’ annual aerial applications of glyphosate.

“Until New Zealand understands the value and the limitations of ecosystem services provided by freshwater, further degradation of our rivers is inevitable,” said David Haynes. 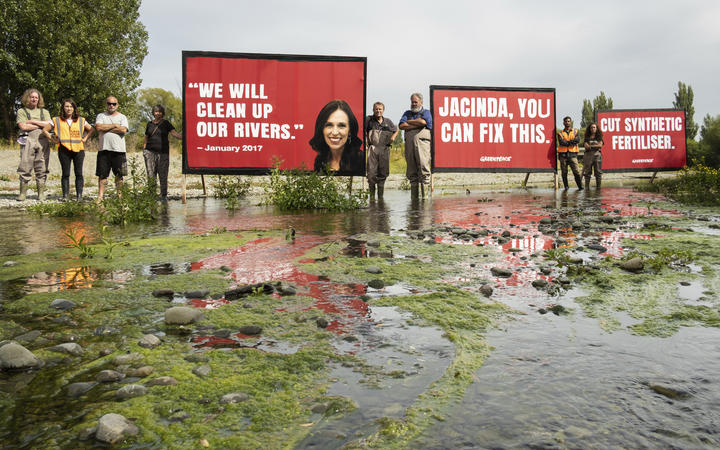 Protest billboards at Canterbury’s Selwyn River. The Selwyn was once rated as one of the country’s best dry fly streams.