A Book to Read and Openly Consider

Posted on 15-03-2022 by Guest
Book Review: “A Jab in the Dark” subtitled “Covid vaccines and the new Health Dictatorship” by Ron Asher. Published by Tross Publishing, Wellington. Reviewed by Francis Albert.
Available from Paper Plus stores or direct from the publisher through the website : www.trosspublishing.co.nz
Ron Asher is a New Zealand writer and commentator on current affairs having lived in Hong Kong  and becoming increasingly concerned at  China’s intrusion into other countries one being New Zealand. As a result in 2017, he wrote an excellent book “In the Jaws of the Dragon: How China Is Taking Over New Zealand.” It was published by Wellington publisher Tross Publishing.
His latest book just released, deals with covid, vaccines and government agenda.
Ron Asher is concerned at the inroads into democracy,  the arrogance of the Prime Minister and her cabinet and the growing manipulation and control of the people. The vehicle for control is covid to increase political power over the people.
He writes “the restrictions on the individual have all been based on the twin lies that Covid is so deadly that it can be combatted only by unprecedented suppression of individual liberties and that the Pfizer vaccine is ‘safe and effective’ when it is neither.”
He sees too many people as uncomprehending and therefore subservient.
“Any democracy is only as strong as its people and the way that the masses in New Zealand have allowed themselves to be hypnotised into believing Covid requires the introduction of a virtual tyranny, does not auger well for the future.”
The style of government is undeniably linked to all facets of life, including the outdoors. Witness the ridiculous firearm laws following the mosque shooting three years ago. The book will be derided as “misinformation” and “conspirational” by government.  But it’s well researched and well written. It should be read. Keep an open mind. Author Ron Asher recommends the reader do so.
Read – then accept or reject.
Read it – it’s very important. 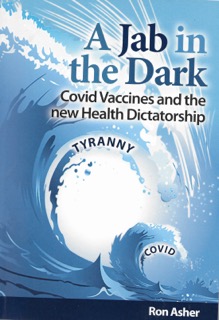 2 Responses to A Book to Read and Openly Consider