Posted on 27-09-2022 by Guest
Recent news that the latest environmental assessment by Land, Air, Water, Aotearoa (LAWA) has revealed a continuing decline in the standard of New Zealand’s lakes, rivers and streams has been labelled as a “big wakeup call” on New Zealand.
Chairman of the  Council of Outdoor Recreation Associations of New Zealand Andi Cockroft said  the LAWA report showed governments and local bodies had failed miserably despite election time promises to reverse the decline in waterways.
“It makes the clean and green and 100% pure marketing brands to be a monstrous lie,” he said.
Andi Cockroft said the image government portrayed to sell tourism and primary produce abroad was a sham.
Often New Zealand’s Southern Alps, with pristine turquoise water flows from glaciers against a backdrop of snow-capped mountains gave a false impression of the reality. Breathtaking vistas as in Hollywood epics like Lord of the Rings and advertising one of the world’s most recognised tourism campaigns, “100% Pure New Zealand” were lies in themselves.
“It’s a con, a big fat fib,” said Andi Cockroft.
Behind New Zealand’s clean and green image is what has been termed before as “a dirty truth” New Zealand’s freshwater rivers are among the most polluted in the developed world.
He said it was ironic that the Land, Air, Water Aotearoa (LAWA) is a collaboration between regional councils, government, and science organisations. Science had over years with testing shown the reality. However, government and  regional councils chose to irresponsibly ignore the findings of scientists.
The current Labour government and its coalition partner the Green Party had at the last two elections promised to reverse the decline but had done nothing meaningful.
“It’s time for election time rhetoric promises to be honoured,” he said.
He called on all political parties and especially the main contenders in next year’s election to step up and champion the health of waterways and if elected,  take strong, tangible action.
“While Labour and the Greens are guilty of broken promises over two elections and inertia in between elections, the John Key led National government 2008-17 had encouraged the rampant growth of corporate dairying in low rainfall areas such as the eastern South Island and Mackenzie Basin.
“Nitrate contamination lethal to aquatic life and a major factor in cancer rates according to international research has been shown by studies by the NZ Federation of Freshwater Anglers to be chronically high,” he said.
Very recently, LAWA revealed monitoring results for 1727 rivers and lakes which showed more than 80 percent of lowland lakes were of a substandard quality. Water quality in rivers and streams is likely to be worse in areas which have been highly modified, whether because of urban environments or pasture, said LAWA scientists. 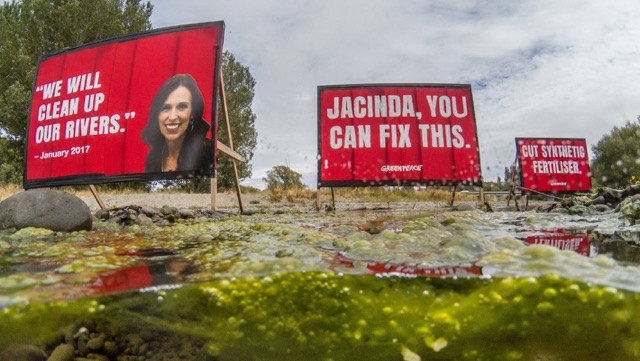 10 Responses to Declines in River and Water Quality Shameful