DoC and Kea: is this the end? 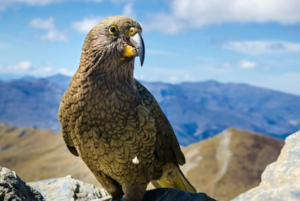 Kea have been in the news again, with TV1 viewers on Wednesday night (9/2/22) treated to the story that tradespeople are sought to help in kea habitat, replacing lead in rooves. This follows last October’s worrying Stuff News headline: “This Is How It Ends: As old as the Southern Alps, kea are on the edge of extinction” (Vance, 2021). That article was also about lead. A few days earlier, Minister of Conservation Kiri Allan announced the two-year roofing project in a press release, stating that that kea were “in trouble” and “need all the help we can give them” (DoC, 2021a).

Kea like eating lead, we’ve known that since last century (Jarrett, 1997). Roof lead replacement work has been happening for decades. Meanwhile, the Department of Conservation (DoC) hasn’t been so keen to acknowledge its own program of randomly spreading readily consumed lead shotgun pellets, an ounce and a half at a time in eight bite sized chunks, left on the mountainsides in and around the carcasses of tahr. When the high numbers of those animals killed in its programs are considered (10,000 in 2019) those actions would seem to display a remarkable lack of concern.

The kea is perhaps the smartest bird on earth, and the only alpine-dwelling parrot. Guardians of the mountains, to some Māori tribes.  Estimates of kea numbers as low as 1000 have been made since 1986 (Bond & Diamond, 1992). With a challenged population like that, thoughtful, informed protection of kea might be expected from their manager. Sadly however DoC has failed with even the basics: incredibly – there has been no assessment of kea numbers and there is still no management plan (DoC, 2021b).

Kea researcher Paul van Klink called DoC out on its lack of a plan for kea in 2018 (Williams, 2018), telling Newsroom he was prepared to stop doing kea work, something he’d been involved with for years, because of DoC’s lack of leadership and the absence of a clear plan. “I’d rather be working on projects that I really see are making a difference.”

Newsroom’s reporter David Williams investigated this problem a little within DoC and found deep problems including accusations of a toxic culture and ignorant, unscientific managers (Williams, 2018). He also found that in 2015, Green MP Ms Eugenie Sage had declared that the lack of a recovery plan for kea was evidence “we’re not taking protection seriously.” Strangely, Sage failed to have a kea plan prepared in the three years she was Conservation Minister (2017-2020). Lead is known to cause memory loss – but usually only after it has been ingested!

DoC has not attempted to control the invading cats. Instead, it has been experimenting for two years and intends to carry on doing that for another three. The experimenters hunted down 45 kea, fitting harnesses with transmitters on them before waiting to see if they would be killed. Last year, 40% died.

Transmitter harnesses on birds cause deaths from stress and entanglement (DoC, 2000a, Green et al., 2013, Orr-Walker, 2014), markedly increase energy expenditure (DoC, 2000b, Barron, 2010) and provide an easy grip for a predator. Kea dying in DoC’s harness-wearing experiment are a terrible waste; nothing can be concluded about normal kea – DoC has fundamentally changed the experimental parameters and thrown the concept of good scientific method to the wind. DoC could have spent its resources usefully, controlling the invading cats – to save the native animals that were being eaten (APWT, 2022).

None of the publicity mentioned the massive killer of kea that could be stopped immediately:  poison.

In the 1950’s a war started across NZ, in which poisonous food was distributed from aircraft, across farms, forests and mountains, targeting certain introduced mammals (mainly the possum, blamed as a threat to both conservation and farm animal health). Generously funded by taxpayers, DoC has been poisoning furiously from the air. In the period from 2008 to 2020 it spread 1080 poison across 3,989,000 ha (EPA, 2021). The other major beneficiary in this lucrative poison war, TbFree, poisoned 3,903,000 ha (EPA, 2021).

The poisonous cereal baits must be a welcome lolly scramble for kea. The preferred time for DoC’s poisoning is late winter/spring, which is a particularly difficult time in the mountains when many kea die from starvation (Jackson, 1969).

The fact that kea were being killed by the poisonings was first recorded in 1963, with four found dead in the Dobson Valley, Canterbury (ERMA, 2007). Unfortunately DoC has been prepared to overlook the on-going high death rates (in 2020, 50% of tracked kea at Matukituki (Mt Aspiring National Park) (DoC, 2020a), and the Wet Jacket area (Fiordland National Park) (DoC, 2020b) after poison was dropped in those areas).

DoC’s clumsy attempts to get around the horrific kea death toll have included: a ban on spreading baits in open alpine zones, which was later removed (DoC, 2014); broken promises that bird repellent would stop kea eating poisoned baits (DoC, 2014); blaming the public for acquainting kea with human food (refuted by DoC’s own study: Kemp et al., 2016, unpublished); unscientific claims that ecology and kea numbers benefit from poisoning (scientific evidence supports the opposite (Pollard, 2016; 2017; Bell et al., 2021); years of invasive experiments capturing thousands of hours of video footage inside and outside hunted down, marked nests, with harnessed birds (notably, with very little evidence of predation found) (DoC, 2014).

The time and money spent by DoC on those fruitless activities destroyed the real opportunities to conduct non-invasive, useful studies of kea ecology and numbers, studies that could have enabled effective, responsible management strategies. DoC is now highlighting lead and predation as causes for decline, while it poisons and harasses the remaining birds.

If DoC doesn’t go away, the kea soon will.

Pollard, J.C., 2017. Response to the Department of Conservation’s reply to “Aerial 1080 poisoning in New Zealand: reasons for concern” https://www.researchgate.net/publication/313881837_Response_to_the_Department_of_Conservation%27s_reply_to_Aerial_1080_poisoning_in_New_Zealand_reasons_for_concern 19pp.