Posted on 22-06-2021 by Guest
Opinion by David Haynes of Nelson
Introduction: On June 18, 2021 “Stuff” ran a Forest and Bird article entitled “Culling Pests Could Slash Carbon Output”. The “pests” included “deer, possums, goats, feral pigs and other invasive animals”. Forest and Bird argued culling these “pests” would allow native forests to recover to a point where they would suck in 15 percent of NZ’;s yearly greenhouse gas emissions.
According to Forest & Bird’s recent report introduced mammals are responsible for preventing 3.4M tonnes of CO2 from being sequestered by trees each year.  Really?
As a former research chemist in the UK, my team’s philosophy was always to challenge most things but validate everything.  Applying this to Forest & Bird’s Protecting Our Natural Ecosystems’ Carbon Report,  as ever, the devil is always in the detail and when you look under the bonnet of the report, there is some engine trouble .
The report contains multiple, uncorroborated statements which unfortunately weakens its scientific rigour.  For example, in respect of loss of stored carbon in some forest types, the report states “… The most likely cause of this decline was the impact of introduced herbivores.”
Most likely?   Were other potential determinants (age, declining rate of growth, nutrient availability, drought, flood, windfall, fires, earthquakes, etc) identified or quantified, and if not, why not?
And statements like “The rapid growth of riparian shrubs and trees after flooding has been suppressed by deer.” Begs the question ‘just flooding in particular?’ Without evidence or citations such statements leave the report flapping rather limply in the air.
The foundation of the report rests on estimates of the number of deer, goats, pigs, etc. – something that a number of NZ scientists, such as Graham Nugent, have for decades been trying, and largely failing, to nail down.  Given our terrain, size of country, the mobility and population dynamics of mammals and the fact they are good at hiding makes it a very, very, very hard thing, nay, impossible thing to do.
The Forest & Bird report takes estimates of ‘introduced pests’ (an emotional, not scientific term) from thirty years ago and simply increases them without explanation, calculation or rationale.  Put simply the figures are plucked out of thin air.  The whole argument that introduced mammals are causing climate change is thus posited on one table of randomly created numbers.
This report is not alone in this respect.  Paid output-directed science (‘we are concerned about this, can you confirm it please’), like the expert scientific witnesses in an Environment Court, involve some degree of conflict:  Do you be totally factual and risk not meeting the client’s expectations (and not getting paid), or do you be more selective in your data sets at the expense of less scientific rigour?  Commercial and scientific imperatives are poor bedfellows.
Unfortunately, the report also adopts a silo-based approach to a problem, rather than the more contemporary inter-dependent paradigm of modern science.  For example, if game animals were exterminated, the 51,000 (yes, I do have a citation for this figure) hunters who eat their quarry would need an alternative meat source –more supermarket construction and more farmed meat production or import, all of which have a considerable carbon footprints.  In 2018, the Food and Agriculture Organisation calculated that animal based food production accounts for 18% of greenhouse gases globally.
Compared to deer, goats, possums and the other culprits identified by Forest and Bird, there is of course another species that produces the vast majority of the planet’s greenhouse gases, pollutes rivers and oceans, deforests millions of hectares of rainforests, causes millions of tonnes of soil to be lost and produces non-biodegradable waste at ever increasing volumes, but we don’t hear Forest & Bird calling for their extermination….yet!
David Haynes is a former research chemist, information technology analyst and investment manager.  Now retired he spends his time working with advocacy groups to protect and enhance our outdoors environment and the recreational and health opportunities it provides to hunters and anglers.
© Red deer hind and youngster 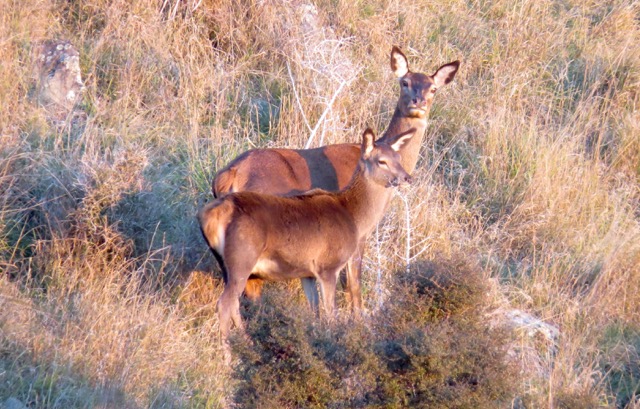 8 Responses to Forest and Bird “Wacky” Blaming of Wild Animals