The New Zealand Federation of Freshwater Anglers, (NZFFA), has much in common with the objectives of the Acclimatization Societies of old and their replacement Fish and Game NZ.

Many of our 14 executive, including myself, are past or present regional councillors of F&G.

It is disappointing to have to respond to the unworthy discussion paper on trout farming, Agenda Item No.11, prepared by Martin Taylor, Chief Executive, Debbie Mair & Jack Kros, Policy Advisors and NZ Fish and Game Council.

Privatizing a common for corporate profit

We are well aware of the present and previous government’s interest in expanding aquaculture in New Zealand thanks to intense lobbying by New Zealand King Salmon, NZKS, and other well capitalized entities. At a superficial level fish farming appeals to the short term interests of politicians keen to promote “the next new thing” while national and global corporates are only too willing to donate to political parties willing to carve up New Zealand’s public resources for private profit.

The cornerstone of acclimatisation societies was always that New Zealand’s fish and game resource remained in public ownership for the enjoyment/ownership of all. That remains the key argument against trout farming today.

The South Island recreational salmon fishery was decimated as government departments, (MAFFish and NIWA), together with “cowboy” entrepreneurs “rushed” adult salmon, eggs & fry, together with fish farming sites, once the preserve of all license holders, in a “free for all” of privatisation.

“Privatisation” of much of the flows of the South Island’s major salmon rivers for irrigation abstraction and the subsequent nitrate pollution of vulnerable aquifers from the out of river use of this “stolen water” has led to many of Canterbury’s aquifer fed lowland streams having nitrate levels that are now toxic to salmonid eggs and fry. To date there are no effective fish screens on any of the irrigations schemes consented by ECan.

The recreational fishery has seen no evidence of mitigation from salmon farmers, TrustPower or the irrigators who took from our fishery.

The damage has been so great that North Canterbury Fish and Game has decided the lowland waters in their region can no longer justify future investment.

With habitat lost to privately owned hatcheries, the plunder of wild stocks, genetic pollution, and sale of F&G hatcheries, salmon farming has proved a disaster for NZ license holders.

With New Zealand’s “tyranny of distance” having to compete with an oversupplied low value global commodity, (farmed trout), the economics of trout farming are questionable at best. Only low cost/low tech farming systems might have a chance of being viable.

Closed land-based re-circulation systems (RAS) would have the highest operating costs eliminating the system with the least ecological impact.

On 10 September 2020 the NZFFA received an unsolicited email from Brian Jones, who previously worked in NZ for Fisheries Research from the 1970s to 1995 before becoming the principal fish pathologist in Western Australia.

He stressed the marginal economics of trout farming in Australia and passed on the warning that unlike Australia where heavy government investment in Tasmanian fish farms has resulted in strong resistance to the importation of farmed trout, this would not be the case in this country. Apparently under WTO rules if New Zealand were to legalise trout farming we would be obliged to accept cheap internationally raised frozen trout which is presently valued at $250 to $500 a tonne. This product is produced cheaply in Asia achieved by industrial scale production.

It seems stupid to put our valuable recreational fishery at risk in the light of this information. The trout farms would likely lose money and imported frozen trout poses a real disease threat to our wild stocks.

Will Trout Farming be another White Elephant?

In 1990 I was taken around a state of the art land-based facility in Georgetown, Prince Edward Island, by the head of the Atlantic Provinces veterinary school. This Norwegian built plant cost the Canadian government $8 million. It was producing farmed rainbow trout and Arctic char at a cost of $3 / kilo.

Because the market price at this time was less than $2.50 / kilo, the Canadian government had recently offered it to the vet school as a gift. My host was deciding whether or not to accept this “white elephant”. [The Atlantic Provinces – Nova Scotia, Newfoundland, New Brunswick and PEI, attract heavy government subsidies to compensate for over-exploited fish, shellfish and forestry resources. The dairy farms I visited through the vet school were subsidised 6:1 by the Canadian Government].

New Zealand cannot pay for imported fish meal and make a profit at Brain Jones’s figures of US 25 to 50 cents / kilo let alone meet the other fixed and variable costs of trout farming.

In exchange for a grandiose gesture to get Stuart Nash, Shane Jones and Winston Peters re-elected, the long suffering tax payer appears to be set up  subsidise yet another “think big” disaster.

Can MPI be trusted given their questionable record on biosecurity?

The massive mortalities of farmed salmon that have occurred in recent years in the Marlborough Sounds are claimed to be due to “global warming” by NZ King Salmon (NZKS) and their mates at MPI, (up to 70% mortalities at one site).

Having trained as a fish vet, I have concerns that two fish pathogens have been identified as being associated with these disastrous salmon losses. One of these, a rickettsia like organism RLO, has never been previously diagnosed in NZ although pathogenic strains have been identified causing significant losses on fish farms around the world.

Several strains of RLOs were identified by MPI only after being found in samples NZKS sent to laboratories in Chile. The RLOs were present only in South Island salmon farms until a failure of biosecurity saw NZKS sell berley to North Island outlets.

MPI elected to assume the RLO was previously present in this country and opportunistically named the previously unidentified fish pathogen the New Zealand rickettsia like organism (NZ-RLO).

Possibly true, or was this an exotic fish pathogenic imported from Chile or Tasmania via the Tasmanian Kettering fish meal plant which supplies the NZ salmon farms?

This may well have been a cynical response to avoid an exotic disease response in an aquatic setting where there would have been no hope of eradication. Simpler to call it a NZ pathogen to save embarrassment and not discredit the planned expansion of the NZ aquaculture industry?

A MPI Intelligence Report stated that this decision protected NZKS from fallout from overseas markets!

Biosecurity, genetic diversity, pollution, poaching, and law enforcement remain as valid today as in the past.

There is no evidence that biosecurity risks of trout farming can be effectively managed in the wild.

Documentation and audits have failed to prevent businesses going bust in the commercial world. Given the lack of expertise and laboratory support of F&G, DOC, and MPI, relying on collective standards, “risk management” and MPI audits, poses an unacceptable risk to our valuable world class recreational trout fishery.

So how did so many South Island rivers become infected with whirling disease, (Myxosoma cerebralis)?

Because salmon are restricted to the South Island, the North Island’s rainbow trout dodged this one.

The “conclusions” in the trout farming paper are spurious.

Research over the past decades has found an increasing number of previously unidentified fish pathogens and there has been an increased awareness of environment damage associated with aquatic feed lots.

Are the only possible recommendation National Council should make on behalf of licence holders.

The NZFFA find this discussion paper on trout farming not to be in the interests of New Zealand anglers.

The NZFFA finds this paper unworthy of the legacy of past acclimatisation societies.

Is it so difficult to simply say NO?

© The cornerstone of acclimatisation societies was always that New Zealand’s fish and game resource remained in public ownership for the enjoyment/ownership of all. 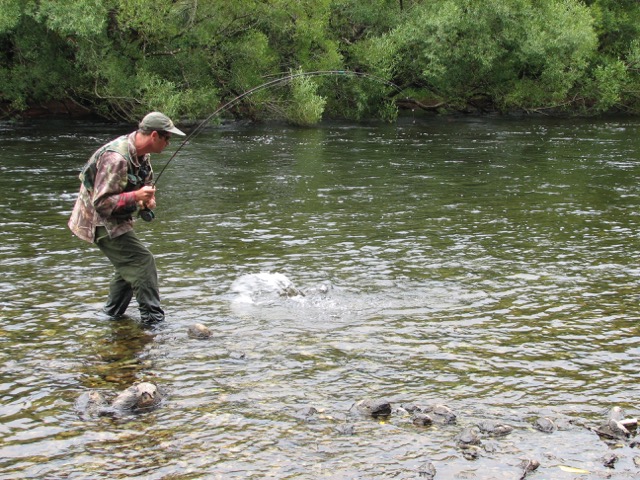