Don’t be a Loser Through Apathy – Get Involved.

Posted on 15-08-2022 by Guest
An Opinion by J B Smith
I wonder about the issues confronting the fishing and hunting fraternity such as anti-firearm measures, Fish and Game reviews with DOC intent on getting control, dwindling rivers in terms of flow and quality, nitrate levels in water and rivers, the 1080 poison sham and a few other critical issues and I wonder where are the warriors?
Yet there is great work being done such as COLFO and the Sporting Shooters Association NZ on firearms issues, LEGASEA on sea fishing issues and the NZ Federation of Freshwater Anglers which has initiated nitrate testing and exposed the high nitrate levels, toxic to both fish and by a big Danish study of 2.7 million people, toxic to human health by way of stomach cancer.
But these organisation are driven by a few energetic and hard working, committed people.
Why do the majority watch as spectators or aren’t even at the arena?
I wonder why people are not more positive and active in pursuing their goals and ambitions in life.
Perhaps the majority procrastinate because the journeys seem too long and taking the first steps seem to achieve so little?
I wonder what happened to qualities like persistence and perseverance like when you have a long slog to get to a hut by nightfall, or to climb a hill.
People are all inclined to avoid doing much until there is a crisis of some sort that forces us to act.
Even so, there’s always just a few battling for the common good, most sit lamely and watch. Some just sit lamely by looking the other way and don’t even take any interest.
Some stupidly say they’re not interested in politics.
Poppycock! Politics is about democracy.
Perhaps people tend to do the easier things before attending to the more difficult ones because we are afraid of failure.
It is also true that everyone to at least some extent, fears rejection and that stops them from speaking up.
Many people do not take an interest in “politics” or even vote because they are afraid that they might not get what they want, so do not try.
If you do not try you can avoid feeling that you failed.
If you are not a player in the game you can avoid losing.
But, of course, those who do not try and play the games are already the losers and failing is part of the proves of learning to be a winner.
In most circumstances a 10 to 20 percent of the people do more than the other 80 or 90 percent because they are not so afraid of criticism or failure.
Well shed the negative attitudes and get in there and help.
To not do so will be at the peril of your outdoor sport. 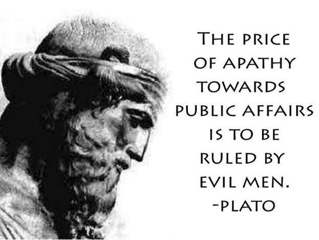 8 Responses to Don’t be a Loser Through Apathy – Get Involved.