Is 1080 Harmful to Trout and Stream Ecology?

Posted on 31-12-2020 by Guest
by Tony Orman
A Federated Farmers and Forest and Bird Fact Sheet on 1080 poison said  “Trials in four West Coast streams using 10 times the number of 1080 baits that would be expected to enter streams during aerial treatment showed no detectable effect on aquatic life in streams.
In separate studies in the United States and New Zealand, 100% of fish fed 1080 baits survived and showed no ill effects.”
The Fact Sheet continued “A study in which meat from a possum that had died from 1080 poison was fed to eels found that all of the eels survived and none became ill.  A NIWA study found that koura (native freshwater crayfish) that ate 1080 baits did not die and showed no ill effects.”
However, the strangeness of the bedfellow relationship of Forest And Bird and Federated Farmers suggests further investigation.
So I turned to google and found a u-tube by Clyde and Steve Graf <https://youtu.be/J4pe-Ma4L-o>.
The tube examined the science focusing on a NIWA study contracted by OSPRI (originally the Animal Health Board) the biggest user of aerial 1080 poison but significantly approved by the Department of Conservation.
Paid Science
It should be noted that “contracted science” is paid, commissioned science. It arguably lacks independence since a favourable report for the client is far more likely to result in future contracts. A case in point was eminent entomologist the late Mike Meads who after a mid-1990s study after an aerial 1080 in a drop at Whitecliffs, Taranaki, expressed deep concern about the long-term ecological effects that destroyed invertebrate organisms vital to the functioning of the forest ecosystem.
Mike Meads’ study was exhaustively peer-reviewed by people far less qualified and in the end, was made redundant.
The NIWA study highlighted by the “Graf Boys” was interesting viewing. NIWA examined a small stream at Greymouth following a 1080 drop. There were odd inconsistencies. It said 1080 had not killed invertebrates or fish but 100 metres downstream there was a “decrease in macro-invertebrates”. The study then in contradictory style said there were “significant effects in the decline of invertebrates’ but then added they “were not ecologically significant” instead of investigating further.
Related is that the RMA review of 1080 in 2007, as biassed as it was in favour of 1080, admitted “there is significant uncertainty regarding the aquatic classification of 1080” due to the lack of data available. It cited “data gaps’ and quoted that mosquito larvae were killed in 0.025 mg 1080 per litre of water. Koura (crayfish) tested over eight days had 1080 in the flesh of tails.
The research in more detail showed discrepancies with the actual poison drops. In the study 6 gm baits were used but in most 1080 drops 12 gm baits are used.
Such basic flaw in methodology is unacceptable and in danger of suggesting the study was biassed.
Fish Decline
A friend who once owned a property near Greymouth bounded by public lands upon which DOC aerially top-dressed with 1080, told me of a stream that once abounded with native fish (inangas) and eels.
Some months after the poison drop, there was a strong, marked decline in the fish life.
Notice koura were tested eight days after the drop.
ERMA noted 1080 does not harmlessly pass through animal bodies ad effects such as creation of amino acid and changes to testicles and sperm can occur. It said “1080 can cause developmental effects in laboratory rodents – “testes showed severe damage (with) absence of sperm and damage to cells.” 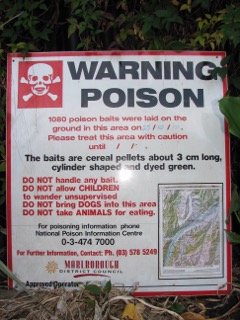 The disruption to male fertility is known as “endocrine disruptor.”
Yet despite this Fish and Game were satisfied that 1080 was harmless to trout. Instead Fish and Game narrowly focused on the effects of anglers consuming trout which had consumed mice dying from 1080. In its support of 1080, Fish and Game NZ quoted a USA scientific paper . But on reading the USA paper, the abstract said “data on 1080 in aquatic ecosystems are incomplete” and “primary and secondary poisoning of non-target vertebrates” due to 1080.
Absence of Sperm
In 2010 a NZ Ecology paper referred to “exposures to sub-lethal doses have been shown to have harmful effects on the heart and testes in animal studies.”
So the question is do “sub-lethal” doses of 1080 result in “severe damage (with) absence of sperm and damage to cells” to male trout, thereby adversely affecting natural spawning?
Since Fish and Game virtually abandoned hatchery releases in the 1970s on the advice of the late scientist Robert McDowall and depended totally on natural spawning for almost 50 years, the reproductive ability of trout is of paramount importance to replenishment of stocks.
In 2005 Landcare Research did a study on  “Sodium fluoroacetate (1080) residues in longfin eels “ – scientists P O’B Lyver, J Ataria, K Trought and P Fisher.
“New Zealand Ministry of Health guidelines state that domestic food products must be equal to or less than the provisional maximum acceptable value (PMA V)  — we detected 1080 residues in eel tissue that were on average 12 times (twelve) higher than the PMAV, one day after eels consumed (1080) contaminated tissue”.
Was there any “endocrine disruptor” effect on eels?
Eels are regarded as a threatened species. The Department of Conservation is responsible for the conservation welfare of native fish such as eels. The conflict is obvious.
How reliable is the science? After all, Federated Farmers, Forest and Bird and Department of Conservation have quoted science. Remember the contradictions of the commissioned NIWA paper?
The muzzling and rejection of Mike Meads and the character of “paid, commissioned” science?
How good is the science which DoC uses to support its use of 1080?
Two USA scientists retired to New Zealand, Pat and Quinn Whiting- O’Keefe audited Department of Conservation scientific research and produced an 88-page monograph reviewing more than 100 scientific papers. Originally from Stanford Research Institute and University of California, San Francisco in the USA with a considerable knowledge in chemistry and an expertise in statistical inference in complex systems, Pat and Quinn Whiting-O’Keefe focused on the aerial poison drops of 1080 to kill possums and rats. 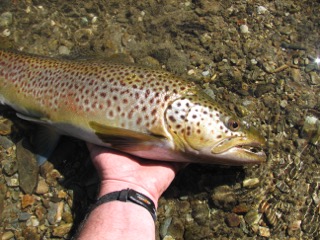 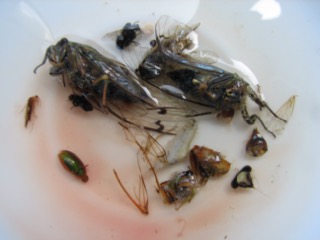 From a trout’s stomach showing two cicada and some bottom fauna invertebrates.

10 Responses to Is 1080 Harmful to Trout and Stream Ecology?