The Department of Conservation’s (DoC’s) blatant disregard for science was vivid in October. Articles claiming that “1080 benefits outweigh kea deaths” were published in newspapers and online. This claim was based on comments from DoC’s Tom Belton, who had presented work on kea to the West Coast Conservation Board.

Kea used to be common in alpine areas but have become rare during DoC’s 35 year reign over nature. DoC is continually poisoning kea habitat, using aerially-distributed food baits laced with broad-spectrum 1080 poison. Its own research shows that many kea die from the poison (50% of monitored birds in recent operations in Fiordland and Mt Aspiring National Parks). Incredibly, despite this carnage and years of promises, DoC has not tried to count the kea and has no management plan (pers. comm., September 2022). Research based on the hope that repellent will stop kea eating the poisoned food has been funded and failing since 2009.

Mr Belton and DoC’s website state that although “a few kea die” in the poisonings, kea benefit for at least the next two seasons. For proof of this, the website cites DoC’s study at Okarito and Fox-Paringa, on the West Coast of the South Island. It ran from 2009-2013, was produced as an internal report in 2015 and published in the NZ Journal of Ecology in 2018.

The Okarito area comprised North and South forests. It was poisoned in 2011, while the Fox-Paringa area was left unpoisoned. Kea were studied in both areas, along with numbers of stoats, rats and mice.

“Benefits” to kea were examined by comparing nesting observations between the poisoned and unpoisoned areas. To track down nests, adult birds were captured and had harnesses with radiotransmitters fitted. The nests were visited every three weeks. Cameras were put inside and outside the nesting cavities. When baby kea were near fledging age, they too were harnessed and transmittered for tracking.

Alarm bells will be ringing for the many readers who feel strongly that you shouldn’t go near nesting birds. You may make the birds abandon the site, and will reveal it by leaving scent trails, making visual changes and causing the birds to take flight and call. In particular, NOT disturbing the nest prior to fledging is vital, because causing young birds to leave the nest early usually kills them. They need to exercise and strengthen muscles until they are ready to go. Because of the high potential for harm, in the United Kingdom, interfering with birds’ nests is illegal.

Studies on kea nests by chemist Dick Jackson in the 1960’s revealed how precious they were: worked on for years by the hen, sometimes helped by another female, then used for a lifetime. Kea were quiet at laying time. Upset parent birds, other kea, black-backed gulls and falcons were all threats to eggs and chicks.

Thus DoC was using a hopelessly unscientific method of nest observation which was likely to cause effects such as abandonment and attracting unwanted animals. Moreover, the design of the experiment was weak and flawed – the 2015 report noted that there was no replication, non-random assignment of the treatments (poison versus no poison) and observers were not blind to the treatments.

Results showed that the likelihood of kea nesting and the number of chicks produced didn’t differ between the poisoned and unpoisoned areas. DoC’s claim of benefit rested solely on a third measure, “nest survival”, but the poor experimental design plus a low number of observations resulted in massive uncertainty (in statistical terms, huge confidence intervals) around the findings, in addition to the spurious nature of the observations.

Seven out of Nine

The number of kea poisoned was not mentioned in the study, and no wonder: in North Okarito, seven of nine monitored kea died! The graphs of the pest numbers revealed additional signs of ecological carnage. In the poisoned area, there was a large rise in mouse numbers within three months, then big eruptions of rats and stoats in 2012-2013.

The study authors stated that the rat eruption response to poisoning at Okarito “required attention”. But rat eruptions in response to aerial 1080 poisoning are commonplace, and used as an excuse for another round of poisoning. The big attention-grabber is the censorship of this data. The 2015 (original) report’s graph showed pest numbers until December 2013. It showed that in December 2012, stoat numbers in the poisoned area escalated violently, amidst high rat numbers. But in the published paper (2018), the graph for the poisoned area is cut off in September 2012, just before the stoat numbers rocketed upwards!

Independent, overseas investigation of DoC’s “science” is well overdue. It will reveal that there is simply no justification for 1080 poisoning of kea, or anything else. 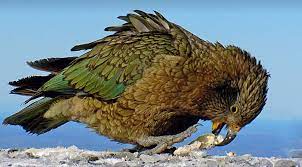