Special report
The Kawésqar National Park extends over 2.8 million hectares, making it the second-largest park in Chile. However, the coastal areas in the park are considered a national reserve, a category that has less protection than a park. The reserve is home to 67 salmon-farming concessions, with an additional 80 concession requests currently pending, National Geographic reported.
National Geographic Pristine Seas director for Latin America Alex Muñoz, in a release, said the reserve is “a place with extraordinary and unique ecosystems” that is already being impacted by salmon farms.
“I hope that the new government issues a ban on this harmful activity inside this protected area of enormous ecological and cultural value,” he said.
Chilean President Boric has questioned the environmental sustainability of the country’s salmon farming industry.  He is now reportedly considering a moratorium  on the farmed salmon sector that would halt its expansion in the country.
“There can be no salmon-farming industry in marine protected areas,” he said. “That’s as simple as … enforcing the law.”
as marine conservation initiative. In March, it kicked off a scientific expedition to study Colombian seas to support the government’s plan to create new marine protected areas that will cover a total 30 percent of Colombia’s exclusive economic zone. It will also produce a documentary to showcase the diversity of Colombia’s marine ecosystems.
Pristine Seas claims to have helped inspire the creation of 26 marine reserves worldwide, covering an area totaling more than 6.5 million square kilometres. 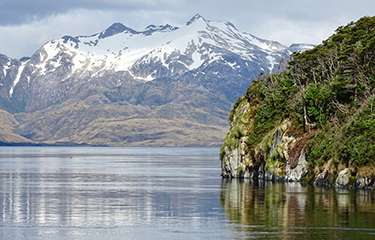 Kawésqar National Park
This entry was posted in Home. Bookmark the permalink.