Page From the Past – Ruahine Ranges Erosion is Natural

Posted on 18-10-2020 by Guest
by Tony Orman
In 1989 Dr. Patrick J Grant a hydrologist and botanist from Hawkes Bay, published a paper entitled “A Hydrologist’s Contribution to the Debate on Wildlife Management”.
In it he recalled back in 1955 with advice from Peter Logan of the NZ Forest Service, Patrick Grant had prepared a report for the Hawkes Bay Catchment Bard on wild animal control in the upper Tukituki Basin of the Ruahine Range.
“At that time I accepted the conventional philosophy that at the head of the Tukituki River is not natural erosion – it is very definitely accelerated erosion or induced.”
He then concluded that “firstly we must gain the necessary control of the (wild) animal populations.”
The same philosophy had appeared on official brochures of the NZ Forest Service and the Soil Conservation and Rivers Control Council.
But historical events made him wonder about the validity of conveniently blaming wild animals for erosion
Bishop Colenso
Ten years later in 1965, Patrick Grant produced a brief historical study of the Tukituki River and in it quoted observations from the diary of missionary/explorer William Colenso who in the 1840s crossed the Ruahine Ranges – almost half  century before red deer were liberated.
“Colenso’s vivid descriptions of severe, active erosion in 1845, made inescapable the conclusion that much of the scarring we see today on the Ruahine Range had its origin before the time of extensive European settlement and the introduction of wild animals,” wrote Patrick Grant.
By 1969 he was convinced that “exotic feral animals did not cause land instability”.
So he researched it delving back in history finding that the Ruahines and elsewhere (e.g. Ureweras had been subjected to four severe periods of erosion since the 13th century.
“My ideas crystallised in 1983 by the results of a systematic study in the upper Waipawa Basin (of the Ruahines),” he related.
By 1985 Patrick Grant was able to show there had been at least seven other periods of accelerated erosion since 180AD.
“These were long before even Polynesians and their animals had arrived in New Zealand.”
Climate cycles had been the cause of erosion.
Mega-droughts
Patrick Grant identified severe drought periods such as 1909 to 1915 when there were several dry/drought years culminating in the 1914-15 mega-drought that “affected high-altitude forests more abruptly and more severely than the impact of browsing animals.”
Within a few years, stressed giant forest trees succumbed to the effects of the prolonged drought.
The Forest Service, Catchment Board and Forest and Bird Society blamed the dead giant tree spars on wild deer and possums. It wasn’t – it was natural climate cycles involving drought.
“The present period of increased erosion and alluviation is primarily the consequence of atmospheric warming and the bigger rainstorms and floods it brings. Browsing animals have not contributed significantly,” said Dr Patrick Grant in his paper’s summary.
© Red deer – not the cause of natural erosion in the Ruahine Ranges 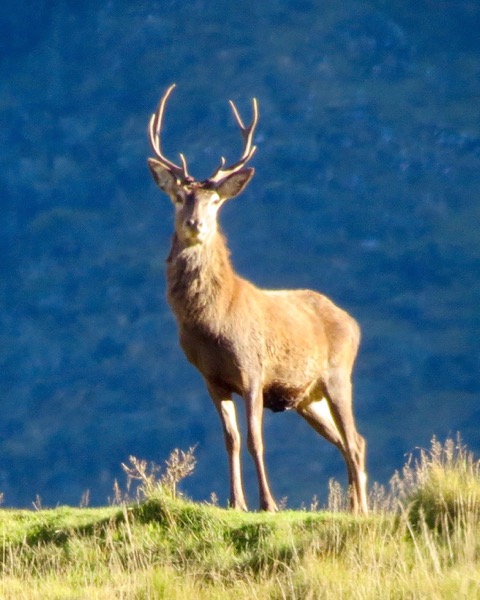