According to the Department of Conservation (DoC) it has solved the problem of previous years’ monitored kiwi chicks dying at Shy Lake, Fiordland, by aerially poisoning the surrounding 40,000 ha of rainforest and islands (the “Wet Jacket” poisoning operation).

The Otago Daily Times (16/10/20) reported that “Results had so far shown a significant decrease in stoats, the No1 predator of kiwi chicks in the area.”

Actually, nothing of the sort has been found.

Cameras “in a small area at Shy Lake” detected a stoat 162 times before the poison, compared to 5 times afterwards. Cameras have also not detected stoats visiting nests since the poisoning, whereas normally DoC’s marked, monitored nests attract multiple visits from stoats and other animals.

Scientists have observed that stoats learn to follow people monitoring birds and they are very likely to hang around disturbed nests. So the fewer camera detections probably mean that DoC has lost its local stoat at Shy Lake, through old age, a trap – or less likely, the 40,000 ha of poison.

Being carnivores, stoats don’t eat the poisonous cereal baits that DoC use. They have to eat poisoned animals to die – the stoats’ main prey is rats – so DoC normally relies on rats slowly dying from 1080 for this. But the rat numbers were low at Wet Jacket. The poisoning had been put off since 2019 due to low rat numbers and they were still low.

So if DoC thinks it has killed off a heap of stoats, does it think they were poisoned by eating poisoned native birds and insects that fed on the baits? Or did the stoats just eat the few rats that were there? Also, was DoC unaware of the research that shows remaining stoats eat more birds after a 1080 drop than beforehand, after rats have gone?

Despite all the cameras, the only predation seen in the three years’ study at Shy Lake was a kea pulling a “dead or nearly dead” chick out of a nest. Most of the evidence of “stoat predation” was feathers, bones, or bodies found in awkward places.

Had DoC not interfered with the kiwi nests, including attaching transmitters to the adults and chicks, taking samples and visiting regularly, the chicks would probably have been alive. Interfering with rare birds’ nests is outlawed in the UK but somehow DoC makes enormous projects and dire management decisions out of it.

Apart from the blanket poisoning of 40,000 ha of ancient, pristine, unchartered biodiversity, the other terrible tragedy of the Wet Jacket poisoning was the kea. Three of six monitored kea died.

The ODT article shows a shameful bias in attempting to downplay the kea loss, even avoiding the word “death”, with “Three monitored kea were found soon after the drop.” The monitoring actually showed that 50% or more of the local kea were probably killed, as they were at Matukituki (Wanaka) earlier this year.

DoC justifies kea deaths with the absolute garbage that kea need the poisoning, to kill stoats that would otherwise attack their nests. There is supposed to be a “net benefit” whereby even though many kea are killed, after the poisoning fewer kea chicks are eaten by stoats. But it has previously been established that stoats do not attack kea nests. And despite thousands of hours of videoing of severely disturbed, marked, repeatedly visited kea nests, DoC still has no evidence of its claimed stoat predation problem.

In one publication DoC irresponsibly and unscientifically claimed that up to 26% of local kea could die in a poisoning operation, and there would still be a net benefit to kea survival through the killing of stoats. Now with 50% of its monitored kea dying, even by its own contrived standards, DoC’s carnage is too great. But while people accept the drivel, it is set to continue. 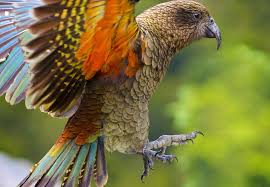