Poison 1080 Being Dumped in Public’s Landfills

Posted on 25-10-2021 by Guest
From “Rangitikei Watch”
1080 poison (Sodium Monofluoroacetate) is a hazardous chemical that is repeatedly dumped in New Zealand’s landfill sites (official and unofficial) without consideration for the potential harm writes Pam Vernon.
Contrary to some claims, 1080 does not easily breakdown into ‘harmless by-products’ – it is highly lethal, stable in water, disperses readily through the environment, and in some conditions remains poisonous for months, if not years. For instance, in March 2000, 20 tonnes of mixed, unwanted 1080 poison baits, between 8-20 years old, were buried in West Coast farmland. When tested a few months later, the substance was still highly toxic.
Official Informatiom Act responses have revealed that for decades, Auckland, Canterbury, Winton, Whanganui and Marton landfills have all been recipients of tonnes of unwanted 1080 poison. This is because according the manufacturers, the cereal baits have a limited shelf-life (how convenient for their profit margins?). Apparently, depending upon storage environments, damp and mould can affect the palatability and structure of the poison baits, which can mean they are unstable, unsafe and unsuitable to be distributed aerially via the helicopter hoppers.
To summarise some of our findings:
• In August 1996, over 12 tonnes of unwanted highly toxic 1080 poison baits were buried in a purpose-dug pit in a managed landfill site at Winton, central Southland. Weeks after the burial, toxic 1080 was still present in some of the groundwater samples (despite unreliable testing methodology).
• 66 tonnes of 1080 poison baits, originally intended for Makarora aerial pest control operation (2015) were unused because of the poor weather. The spoiled poison baits were sent to a Manawatu-Whanganui landfill site (Probably Marton).
• A storage shed in Haast was swamped during recent flooding, and the rising river water damaged over 16 tonnes of toxic 1080 bait. This week, that poison has been buried at…you guessed it, Marton.
• In February 2018, 600kgs of 1080 poison baits was transported from the Whitianga storage site (within a residential area) to a North Auckland landfill.
• Also in 1996, in Whanganui (near the 1080 poison factory) 61 tonnes of 1080 poison cereal bait was buried in a shallow, unlined hole at the landfill site, now known as Balgownie Reserve. Tragically, this area was previously a precious wetland of historical and cultural significance. A primary school is situated next door.
Ignorance
There are many other stories waiting to be exposed. Meanwhile, none of New Zealand’s authorities adheres to international guidelines on toxic waste disposal, including the requirement to monitor community health in these areas. And concerns are repeatedly raised about potential harmful affects from the storage, disposal and aerial distribution of 1080 poison.
In the USA and in Europe, authorities are waking-up to their responsibilities to citizens. New funding is being provided to enable the costly clean-up of old toxic dump sites, and this involves specialists digging up the hazardous waste and disposing of it safely. Public health is a priority.
It’s bad enough to distribute tonnes of 1080 poison baits over thousands of hectares—66 tonnes of the poison baits could kill or seriously harm almost the whole population of New Zealand. It’s another thing however to dump this amount of lethally toxic substance into one shallow hole. What impact could a highly concentrated amount of this toxic chemical have on the health of nearby, unknowing, small communities?
When is the New Zealand Government going to face up to the magnitude of our ongoing soil and water contamination, stop the dumping of hazardous waste and start the crucial clean-up operations?
© “It’s bad enough to distribute tonnes of 1080 poison baits over thousands of hectares” 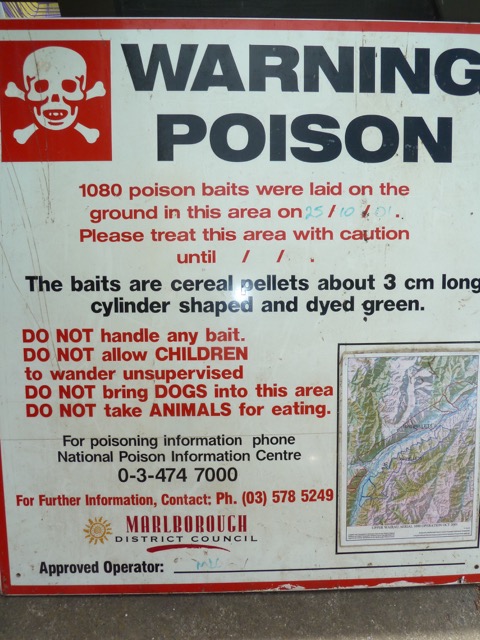 7 Responses to Poison 1080 Being Dumped in Public’s Landfills