Posted on 29-06-2022 by Guest
Police handling of firearms issues has been slammed by  Neville Dodd president of the Sporting Shooters Association of NZ.  His comment was in response to Auckland Police Superintendent Malthus saying that, “Keeping firearms owners safe is a key focus for Police”.
“Safe from who?” asked Neville Dodd. “From our perspective the biggest threat and the most damage to firearm owners in New Zealand unquestionably comes from the present government and Police”.
Government and the police had marginilised the firearm community.
“In addition government and police have confiscated and destroyed treasured and historic firearms from law abiding citizens, made it harder to obtain a firearms licence – not forgetting year long delays in licence renewals – carried out home invasions with the destruction of licensed owners property, produced regulations that will close shooting clubs and ranges and put owners at risk by neglecting to secure their addresses and personal details.”
“Next the law abiding firearm public will face the registration of all firearms with the inherent risks that poses for law abiding owners to say nothing of the huge impost on the taxpayer of $1 million per week.
At the same time as all of this the number of shootings of civilians by police appears to be on the increase.
“So superintendent we can do without the focus of Police, thank you very much,” said Neville Dodd. 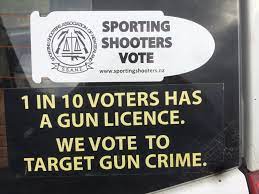