Predators Are Not Evil But are Invariability Part of Healthy Ecosystems

Posted on 30-10-2022 by Guest
Opinion by Tony Orman
New Zealand has for many decades waged a war against predators. Currently there are a number of anti-predator campaigns, often using public money in big spend-ups on futile aerial poisoning exercises. In addition, in the end, the blanket operations run counter to the impassioned aim of exterminating predators (e.g. rats) and instead cause major disruption to food chains and serious damage to the ecosystem.
Invariably anti-predator campaigns have as foundation, an “anti-introduced species phobia” which ideologically decree that anything introduced such as trout and even salmon, are invasive pests. Trout are often labelled as invasive pests by agencies as Forest and Bird and the Department of Conservation while farming spokesman seek a scapegoat for water contamination or excessive abstraction for irrigation.
Nature knows best. Trout were introduced and after an initial upsurge, populations stabilised to fit the “carrying capacity” of the habitat and merged into ecological niches and relationships with other species. “Introduced” trout may prey on whitebait but then native shags and native eels prey on juvenile trout. Aren’t humans an introduced species by way of a Polynesian migration about the 13th century and European migration starting in the 19th century?
Currently the obsessive hatred about predators is seen in campaigns such as Predator Free 2050 and Zero Invasive Predators, the latter jazzily known by the acronym of ZIP. The zealous programmes have earned international recognition such as when “Time” magazine proclaimed “Rats, Possums and Stoats Beware! New Zealand Goes to War Against Invasive Pests.”
But the programmes are like the 1837 Hans Christian Andersen fairy tale “The Emperor’s New Clothes”. At one stage in the fable, the wise man serving the Emperor thinks “What!” “Is it possible that I am a fool? I have never thought so myself. No one must know it now if I am so. Can it be, that I am unfit for my job?”
Those questions should be asked of those who champion Predator Free 2050 and ZIP – people from Prime Ministers to central and local government politicians, local bodies, naive unquestioning media whoop as investigative journalists, extreme green groups and even unprincipled “scientists” following the money trail of funding, all pursue the dream of exterminating New Zealand’s predators.
However the reality is the dreams are running against the way Nature behaves. 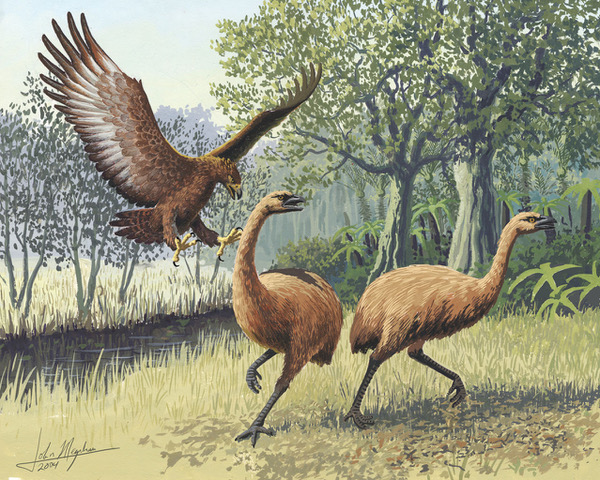 Haast Eagle preyed on moa.
Predator Role
Wildlife mangers overseas are increasingly regarding predators as an important part of a healthy ecosystem. In 2014 Al S Glen of New Zealand’s Landcare Research and Christopher Dickman of Sydney University co-authored a book on “Carnivores of Australia” and in a chapter “The Importance of Predators” said “to maintain or restore functioning ecosystems, wildlife managers must consider the ecological importance of predators.”
Predators tend to remove vulnerable prey, such as the old, injured, sick, or very young, leaving more food for the survival and success of healthy prey species. Also, by controlling the size of prey populations, predators help slow down the spread of disease. Predators will catch healthy prey when they can, but catching sick or injured or unwary prey is far more likely and helps in the formation of healthier prey populations because only the fittest animals survive and are able to reproduce.
In addition, predators help to reduce the negative impacts that their prey may have on the ecosystem if they become too abundant or it they stayed in one area for too long.  Anglers broadly speaking, are a predator of trout and salmon.
Caroline Fraser writing for the US Yale School of the Environment said experts “beginning with aquatic experiments, have amassed considerable evidence of damage done to food chains by predator removal and have extended such studies to land.”
Predators are simply mostly a part of any ecosystem’s food chain functioning. New Zealand’s native falcon prey on other native birds such as tuis and bellbirds. Blue duck (whio) prey almost entirely on aquatic invertebrates, mostly caddisfly larvae. Kiwi prey on worms.
When animals of a predatory nature are introduced such as rats and stoats were to New Zealand, they go through a “boom and bust” phase before their populations settle down to a relatively static state.  Unfortunately, sometimes prey species can become drastically reduced or even extinct as a result of the predator “boom”.  The critical aspect of managing this situation is avoiding predator “booms”.  Consequently,the fervour and haste which the Department of Conservation and local councils applies with toxins is mismanagement, reckless and fraught with ecological danger.
Disastrous Outcomes
Large scale poisoning with eco-toxins such as 1080 and brodifacoum may heavily reduce predator numbers initially but with a few short years, the outcome is disastrous. The science is there to show the resurgence in predator numbers and subsequent wrecking of the food chain.
Wendy Ruscoe in a study published in Landcare Research’s publication 2008 showed aerial dropping of 1080 will temporarily knock back a rat population but due to the rodent’s amazing reproductive capacity, the surviving rats recover rapidly and within three years, are likely to be two to three times greater than before poisoning began.
A 2007 study by Landcare scientists Graham Nugent and Peter Sweetapple showed rat numbers recovered pre-poison levels within 18 months and at the two to three year mark, rat abundance could be four times greater than before poisoning.
Ecological Damage
That is not counting the birds and insects and other invertebrate organisms killed by 1080 as research demonstrated, by DSIR scientist Mike Meads, in the 1980’s.  1080 was originally patented as an insecticide in 1927.
Examples are many of human interference directly or indirectly into Nature’s food chains resulting in profound consequences. In a classic 1966 experiment, biologist Robert Paine removed the purple seastar, Pisaster ochraceus — a voracious mussel-feeder — from an area of coastline in Washington state. The predator gone, mussels exploded in numbers, crowding out biodiverse kelp communities with monoculture.
Less than a decade after Pisaster, marine ecologists James Estes and John Palmisano reached the astonishing and widely reported conclusion that hunting of sea otters had caused the collapse of kelp forests around the Aleutian Islands. With otters reduced to low levels, the prey (sea urchins) stripped the kelp forests.
Playing God
The concept of being ”predator free” or “zero predators” has no ecological justification, except in limited circumstances on smaller offshore islands and “mainland islands” . Even in islands where predators may have been eliminated e.g. Secretary Island in Fiordland, the success is short-lived and temporary as animals can and do swim from the mainland to recolonise.
It seem incomprehensible that an agency such as the Department of Conservation and the concepts of Predator Free 2050 and ZIP should go unquestioned in the light of the understanding internationally of the dangers of playing God with predators..
But the ‘fly in the ointment’ is human nature.  For example a scientist in DOC  working on predator work, arguably has a vested interest by way of employment and a handsome salary. Similarly with any consultant scientist attached to Predator Free 2050 and ZIP.
For others of zealous ideological nature, as some humans are wont to be, it becomes the pursuit of “The Impossible Dream.”
For politicians it’s good P.R. to declare war on the baddies, no matter how pointless and damaging that might be.
The sad outcomes are the gross misuse of public funds and more tragically the profound ecological damage that often occurs in the pursuit of that “Impossible Dream.”
Footnote: Tony Orman has spent a lifetime in the outdoors observing and reading about it and Nature. He has had some two dozen books published, mainly on fishing, deerstalking, conservation and rural life. 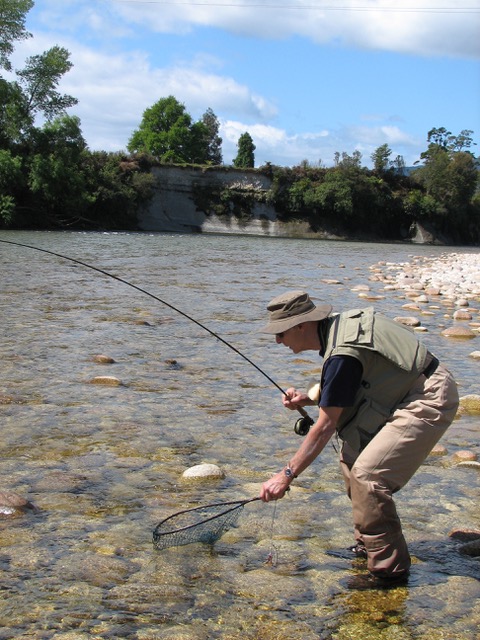 Aren’t anglers really predators of trout?
This entry was posted in Home. Bookmark the permalink.