Remember it’s Public Lands and Not Government’s or DOC’s.

Posted on 09-01-2023 by Guest
Opinion by Clyde Graf
Recently the Game Animal Council in its summer newsletter, identified access as a key “top of the mind” issue for recreational hunters. It said;-
“Access issues are by far the biggest concern for hunters across New Zealand according to a recent survey conducted by the Game Animal Council ——the on-line survey of nearly 700 hunters saw 67% of respondents identify access difficulties as the thing that most impacts their hunting —to put into context just how widespread concerns are over access are, the next most commonly identified issue affecting hunters was the impact of aerial 1080 poisoning operations, at just 12.5% of responses.
But the Game Animal Council seems to be missing the point, i.e.the relationship between access and poisoning with 1080 on public lands.
Is the survey worthless data? Almost certainly in my opinion.
However, this is a good outcome for the Game Animal council, which is a statutory body. Its members are appointed by and answerable to, the Minister of Conservation, or in other words, the Department of Conservation. In essence, the Game Animal Council isn’t able to advocate against the government’s poison drops, because If they did, it would very probably be dis-established.
So, who are the respondents of the Game Animal Council’s survey? Who was sent the questionnaire? Was it distributed to hunters that book permits to hunt national parks and state forests, or was it sent to trout fishermen, or game bird shooters? Or perhaps it’s mostly Safari Club International members that were given the opportunity to respond? Or is it only people on the Game Animal Council’s mailing list?
I don’t know. I never received an invitation to participate in the survey. Nor have others I’ve spoken to. If it’s chamois and tahr hunters, then access probably is a big issue, but the aerial poisoning operations aren’t impacting the chamois and tahr as much as deer.
It appears that most of the respondents may be private land hunters – or prefer to hunt private land, or hunt land where they require access through private land. That’s probably why the report states access as respondents as the biggest issue, and that’s why that statistic appears on top.
Are the results pertinent to public land – state forests and national parks? Of course not. If we’re talking about deer (which is the game animal most affected by the aerial poisoning operations) – then access to hunting the national parks and state forests, which equates to public land – is still easily available.
Public Land
However, If you are more interested in private land hunting, then access becomes the biggest issue. But for the average hunter, public land is what’s hunted in New Zealand.
So why does the GAC report seem to imply that poisoning operations are a minor issue in our wild places, when in fact they are the the biggest issue by far?
The other important factor is how was the questionnaire constructed? Was it targeted at open country hunters, or mountain hunters? Private land hunters or public land hunters? As far as the poison drops go – little else really matters in the public land forests. Stop the aerial 1080 poisoning operations and most of the other issues will take care of themselves. And the issue of access will reduce because there will be more deer for everyone to enjoy, without having to resort to private land to get an animal. Importantly native wildlife would be much better off too.
Stop the aerial poisoning operations and then private enterprise management – i.e. deer recovery – could kick into gear again in our forests, if and where required. It worked in the past, and it can work again. It’s certainly a better management plan than indiscriminate poisoning campaigns.
Keep in mind – over 75% of national parks and state forests are aerially poisoned on a 3 – 5 year rotational basis, and the land area is increasing year on year. Deer populations are devastated in those areas and the outlook is not improving. 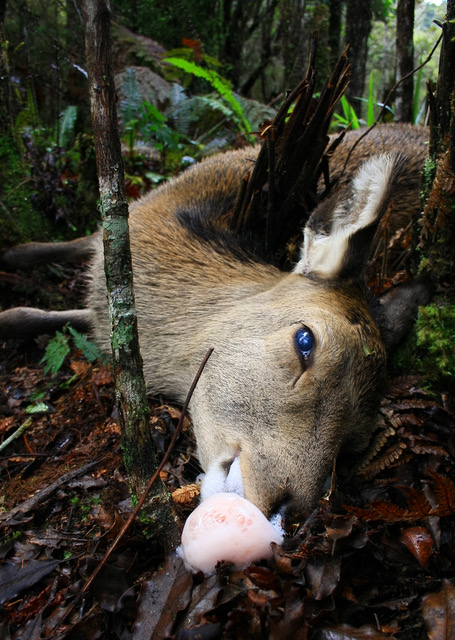 West Coast – red deer killed by 1080. 1080 causes a slow and torturous death, and can
take up to 48 hours to kill. Note froth emitted. Photo Graf Boys
Fact – 1080 Kills Deer
My brother Steve and I know this because we film and photograph in a lot of those areas – both North and South Islands –  and we have been doing so for the last 25 years.
Our estimates are deer numbers in state forests and national parks are now, at best, 10% of what they were in the 1980’s, let alone in the 1950’s when they were in fact in high numbers. It is scientifically impossible for wild deer populations to increase while so much poison is being spread to kill them. And kill them it does.
The state of the wild deer population within public land is in dire shape – and it’s mostly due to targeted, and aerial poisoning operations. It’s an issue that far exceeds that of access for the future of hunting on public land in New Zealand.
But even in areas like Lake Waikaremoana, where there’s never been an aerial poisoning operation, the deer numbers are extremely low. They have been declining for decades, and year on year that decline continues. Only a few years ago it was possible to take a person hunting in the roar and shoot a couple of stags. Now they’re lucky to even hear one.
Relentless hunting pressure also has an impact in some of the public land hunting areas. However, there are the odd spots, like the Kaimai Forest Park, north-west of Tauranga, that contain thick bush, heavily furnished with supple jack vines. Some of these areas have yet to be poisoned, and continue to sustain moderate deer numbers. But it’s hard going. In some of these areas it’s the thick bush habitat that is the deer herd’s ally and defense.
Three Year 1080 Rotation
Below I’ve listed some of the facts to consider regarding the wild deer populations within public land in New Zealand.
– Most forests parks are aerially poisoned every 2 – 5 years – which devastate the deer numbers every time those operations take place. The populations take many years to recover, but rarely do because another poison drop is always imminent.
(The reason for the three year gap between poison drops is easy to find in Landcare Research studies, which show that after 1080 poison aerial operations, the 15% surviving rat population breed furiously, unimpeded, and recover to pre-poison numbers within 18 months. By year 3, they’ve increased three to four fold, which the wealthy poison operators say, justifies another poison drop to stem the exploding rat populations. It’s a cycle that, once started, continues ad infinitum. A lucrative pest control future for those involved. The DOC obviously hasn’t told this science-based fact to the Minister).
– River beds that used to be mown flat by deer browse in spring and summer are now over-grown valleys of hay.
– Where you used to find cast antlers on most hunts. Now you rarely do.
– Years ago there would often be valleys of roaring red stags. Now you’re lucky to find a roar that isn’t human.
– Deer sign used to be abundant, now it’s often hard to locate any fresh sign.
– Many public land weekend hunters don’t get a stag during the roar – when years ago it was easy.
– Over the years the helicopter hunters had to poach more and more just to get required numbers, with most having to stop because it was unsustainable.
– Chillers that used to be located all over the country started to close because they couldn’t get the numbers of deer required to make them profitable.
– Then came the increasing poisoning operations that made it next to impossible to operate within the legal boundaries. Poisoned animals retain toxic 1080 levels, and are poisonous to anything that consumes them – man, animal, bird or insect.
– If you had to meat-hunt now for a living – on public land, and with no spotlighting – you wouldn’t have a show. You’d start with a few animals, and that would be the end of it. You’d be on the unemployment benefit within a month. 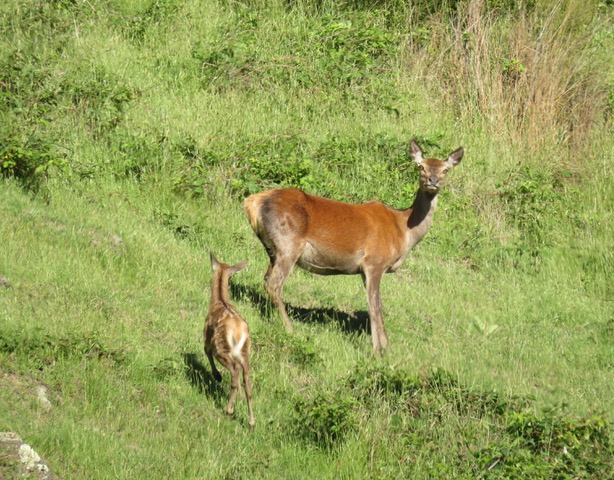 Deer have just one fawn a year and some do not survive first winter.  “Talk about deer numbers exploding out in the
forests is nonsense”  – photo Tony Orman
Deer Explosion Nonsense
Just to add to this important issue – the talk I’m hearing about deer numbers exploding out in the forests is not only nonsense, it’s impossible due to the aerial poisoning campaigns. And it appears to be gossip that inexperienced hunters are also inadvertently sharing.
I suspect It’s a lie that’s being deliberately spread by people that despise deer, and want to see wild deer eradicated from New Zealand. Yes, there’s some blocks where deer numbers are high, but it’s mostly on private farm land – and that’s where access can be an issue, but private land is the landowner’s business. But, It’s out in the public estate, where it matters to us all.
Unfortunately, this whole regime to demonise deer has been going on for years. It’s a terrible shame, because the release of wild deer in the early days is the best thing to have happened in New Zealand forests, and long may the deer exist. The forests, in the broadest sense, needs browse. After all, the vegetation has evolved over 50-60 million years under strong browsing pressure by the several moa species and other avian browsers. Some remain today, for example the kereru.
Biggest Issue
Aerial poisoning operations are the biggest issue by far. They’re dangerous, and they devastate the wildlife within the forests – native and non-native.  The poison 1080 (Sodium mono fluoroacetate), first patented as an insecticide, is best described as an ecosystem poison. It kills, without antidote, every kind of living creature – animals, birds, fish, insects, and of course, people.
In closing, I think it’s important to point out just how the animal game council is influenced.
– The members have to be approved by government Ministers of Conservation.
– The Minister is advised – arguably manipulated – by pro-poison, deer-phobic bureaucrats in the Department of Conservation’s head office.
– Game Animal Council members are under pressure to please those ministers or they risk losing their seat.
– If their survey showed the real facts – that the poison campaigns are the biggest issue, and the Council needed to advocate against them – it would mean, as I stated earlier, that the Council would be dis-established.
In my opinion, the outcomes we get from the “government – obliged” Game Animal Council may not be in the best interests for the future of deer hunting on public land. And – very, very importantly remember – it’s public land, not the government’s or DOC land, as is erroneously stated in much media.
Footnote: Clyde Graf has been hunting for over 50 years, and photographing and filming for the last 25 years, in both the North and South Islands. He and his brother Steve have filmed and compiled many documentaries and videos (available on Youtube), which include outstanding deer photography, and issues around 1080 poison.  Further information about their work involving 1080 poisoning operations across New Zealand can be found at www.tv-wild.com 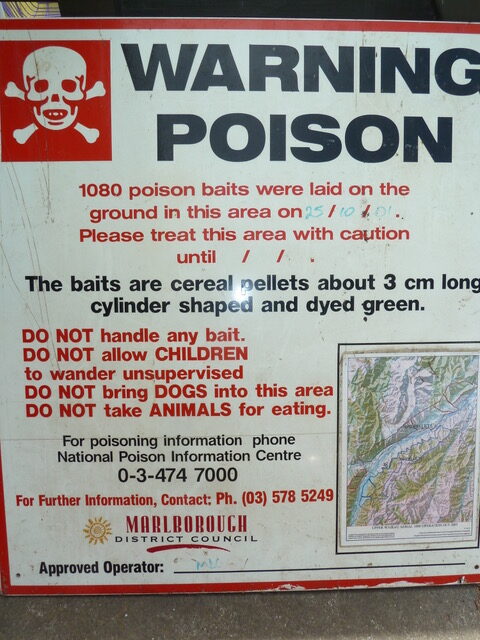 5 Responses to Remember it’s Public Lands and Not Government’s or DOC’s.