The Road to Hell

Posted on 29-07-2022 by Guest
An opinion by Paul Revere
On March 15, 2019 (Julius Caesar’s  “Ides of March”)  innocent and defenceless people were slaughtered at a Christchurch mosque.
The mass murderer, Brenton Tarrant, was not a New Zealand citizen.
Incompetent police, granting him a firearms licence, failed to comply with the proper process.
Tarrant applied in Hamilton when resident in Dunedin.
He had no proper referees, only a couple of on-line contacts.
He was under surveillance by Australian authorities.
Were the police aware of his background?
Did they even care?
The tragedy was exploited by politicians and the anti-gun faction to further their prejudiced agendas.
The reaction by the government was rushed, ill considered and unwarranted.
Less than a month after the mosque shootings, New Zealand’s parliament voted by 119 to 1 on the “reforms”. Semi-automatic sporting rifles and parts were prohibited and confiscated in what was fraudulently called a “buy-back”.
Only ACT’s sole MP, party leader David Seymour voted against the absurdly rushed law.
There was virtually no public input or debate.
The select committee process was rushed and a farce.
The rushed law had hit the wrong and innocent target – the law abiding firearm ownership public.
The Minister of Police lied when he said this confiscation of legally owned property from responsible citizens made us all safer.
There have been greatly increased shootings in the greater Auckland urban area by unlicensed firearms users such as gang members and criminals.
We are not safer. Living in New Zealand is now more dangerous than ever before.
This naive and foolish ambition to prevent responsible citizens from owning and using guns reminds me of the horror that the victims must have experienced.
My heart aches for these poor people.
Imagine being attacked and killed so coldly and cruelly with no ability to escape, fight back or defend one’s self.
No-one should ever have to experience such terror.
People must be allowed and enabled to defend themselves and their lives!
Violent, evil people whose twisted minds motivate them to commit such horrible crimes have and will always exist.
Any individual or group of individuals could become their intended victims.
A future “Tarrant ” might target my or your church, synagogue children’s school or other venue instead of a mosque and what could you or I do about it?
The politically influential anti-gun busybodies would prefer that we try to hide, run or cower in fear as we are stalked and cruelly slaughtered instead of having any means of resisting or defending our own lives.
Prohibiting guns is as foolish as prohibiting liquor, recreational drugs or anything else because only the peaceful and obedient “good people” comply.
The reality is what is being prohibited still exists.
Criminals do not comply and often find ways to benefit from not doing so.
Decent and law abiding people who consider the prohibition unfair do not comply and become criminalised.
The anti-gun busybodies might mean well but they are naive and unrealistic in assuming that guns will “disappear” and never again be misused by anyone.
They are in a sense “nutty.”
Sensible and realistic people understand that guns and other weapons will always  be available for use by criminals who wish to use them to rob or harm the rest of us.
Especially those who have been rendered more vulnerable, defensive and helpless to resist or defend themselves.
The good intentions of the naive “nutty” anti-gun busybodies to prohibit responsible citizens from having the means to defend our property, families, friends and lives in times of crisis are paving the road to the hell that those poor victims of the mosgue tragedy endured.
We must not allow the right to defend ourselves, our property and our lives to be taken from us!
Footnote: Paul Revere is a life long law-abiding firearm owner 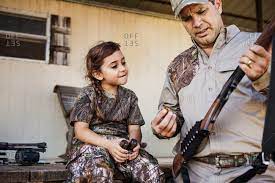 Father showing daughter firearm safety and firearms are to be respected.

9 Responses to The Road to Hell