There And Back Again – a Turtle of a Trip

Posted on 23-12-2021 by Guest
by  Louis Houlbrooke (Taxpayers’ Union)
Taxpayers shelled out thousands of dollars transporting a dead turtle from Banks Peninsula to Wellington, storing it in a freezer for 21 months, then sending it back down to where it washed up for a high-powered and fully-catered powhiri, complete with a helicopter ride and a handmade coffin constructed by public servants. No scientific research was performed at any stage. 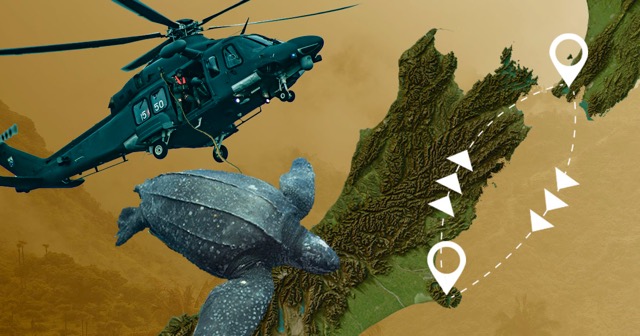 © The taxpayer-paid trip
Based on responses to several Official Information Act requests, plus earlier media reports, the Taxpayers’ Union set out the timeline as follows:-.
In March 2019, a dead leatherback turtle is found on the shore in Banks Peninsula. He is never named though he is known at the Taxpayers’ Union as Michelangelo.
DOC advises Te Papa that the local Banks Peninsula marae, Koukourārata, has provided approval for Te Papa to receive the turtle.
A DOC ranger uses a tractor to transfer the turtle to the back of his ute, then commissions a truck belonging to a pet food company to keep the turtle chilled. The ranger warns that transporting the turtle to Wellington will be a “logistical nightmare”. The ranger’s wage costs are $200.
The turtle is collected by Te Papa from the Department of Conservation office in Christchurch and driven up to Wellington in Te Papa’s Toyota Hilux, at a reported cost of $475.75.
The turtle arrives at Te Papa’s Tory Street facility, where staff plan to perform a necropsy, check its gut for plastic, gather biological information for “the global turtle research community”, and ultimately skeletonise the corpse.
Grief
In an apparent change of heart from the local iwi, Ngāi Tahu representative Matui Payne tells media of “a sense of grief and sadness that we didn’t have the opportunity to grieve for our kaitiaki, for our tipuna.” Te Papa cites “issues relating to consultation and support” and enters into discussion with Koukourārata “regarding the return and repatriation of the honu [turtle].”
The late turtle spends 21 months in Te Papa’s freezer.
No scientific research is conducted. Te Papa explains, “To enable scientific research to be undertaken, the turtle would have had to be skeletonised (i.e. processes undertaken to reduce the turtle remains to a skeleton). In conjunction with tikanga, it is usually important that all parts of the taonga or specimen (in this case, the turtle) should be buried, if possible. . .In terms of science objectives, Te Papa has not conducted any research on the turtle during its time at Te Papa so has not gained any research insights.”
Turtle Coffin
At some point, Te Papa staff build a “te honu crate” or turtle coffin, with materials costing $580.85.
On 11 December 2020, Te Papa staff are joined by a contingent from Koukourārata for a karakia (prayer) in Wellington.
DOC transports the turtle from Wellington back to Bank Peninsula in a refrigerated truck. The three-day journey includes reported costs of $940 in mileage, $448 for the Cook Strait ferry crossing, and $500 in wage costs. A Koukourārata representative accompanies the turtle during this journey.
Eight Te Papa staff, including members of the Board and the senior leadership team, fly to Canterbury for the deceased turtle’s powhiri.
Domestic travel, car rental and accommodation: $4,327.77
Powhiri and kai for 40 people: $880.00
Koha
At the powhiri, the eight Te Papa staff are joined by seven DOC staff.
Four of the DOC staff are paid by the hour, for a total cost of $600.
DOC pays a $200 koha to Koukourārata.
DOC spends $130 on mileage.
The turtle arrives at its powhiri, is removed from its coffin, placed on an altar to thaw while speeches are given, and eventually strapped to a crate and flown via helicopter to its burial site: a hilltop on a nearby island. DOC pays $1600 for the helicopter service. Video and photographs from the day capture these events.
Two DOC staff conduct an archeological survey of the burial site, and three staff dig the hole. Reported wage costs for these activities are $900.
Union spokesperson Louis Houlbrooke says, “The total cost to taxpayers for Michelangelo’s eventful afterlife is difficult to quantify, but we would place it in the tens of thousands. Te Papa and DOC’s total reported expenses were $11,742.31, but that excludes the time cost for high-level salaried staff.”
Bizarre
“Te Papa was prepared to obtain this turtle for research on a rare species. That is valid. Koukourārata, who had expressed no interest when the turtle first washed up, suddenly wanted it back and intact. The result was a truly bizarre odyssey that saw a dead turtle travel by land, sea, and air, before ultimately being buried by public servants on a hilltop.”
Waste
“After thousands of dollars and 21 months of fuss, the turtle ends up right back where it started, providing no scientific insights. In fact, Te Papa told us over the phone that they couldn’t even verify whether the turtle was male or female. What a waste. Such a majestic creature deserved far better than to wait 21 months in a freezer while bureaucrats negotiated a protracted repatriation mission that would make the Ministry of Foreign Affairs blush.”
Enormous Pride
“We have to give some credit to Te Papa and DOC for their thorough answers to our questions. We get the sense they’re proud of the enormous time, attention, and staff hours they’ve devoted to Michelangelo’s odyssey. Unfortunately, they’ve tarnished the turtle’s legacy with this epic saga of government waste.” 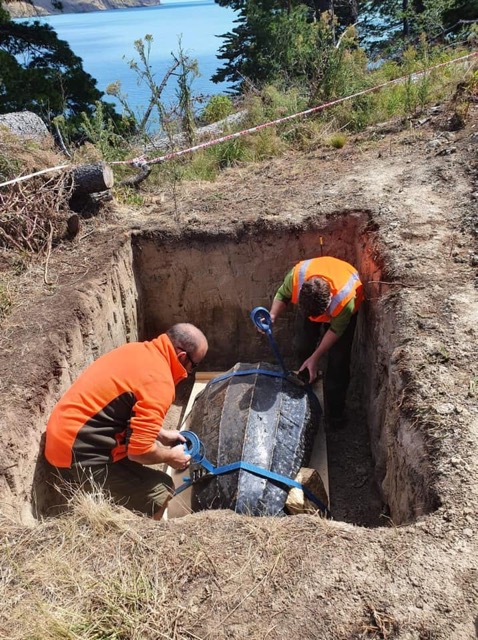 ©The turtle is buried high above its preferred habitat.
This entry was posted in Home. Bookmark the permalink.