Oh No, Not Another Conspiracy Theory!

“Ah but let’s return to New Zealand and Roger Douglas and the Mont Pelerin Society,” my friend murmured.
Mont Pelerin Society?
NZ’s Mont Pelerin
The Mont Pelerin Society (MPS) was created in 1947 by the free market economist and philosopher Friedrich von Hayek and advocates “neo-liberalism,” an ideology based on less government and minimal regulation of business.
Bob plucked from his library a scrap book and within an article by eminent writer the UK’s George Monibot who said “When the Mont Pelerin Society first met, in 1947, its political project did not have a name”.
“But it knew where it was going.”
The society’s founder, Friedrich von Hayek, remarked that the battle for ideas would take at least a generation to win, but he knew that his intellectual army would attract powerful backers. Its philosophy, which later came to be known as neoliberalism, accorded with the interests of the ultra-rich, so the ultra-rich would pay for it.”
In New Zealand, politicians like Roger Douglas, Ruth Richardson, Simon Upton and Business Roundtable director  were allegedly the core of New Zealand’s Mont Pelerin branch.
Did these individuals sit around the table discussing the latest rugby or cricket test or how to grow cucumbers?
No they had a plan hatching. They were conspiring
“The New Citizen” newspaper in 1997 recalled “by 1983-4 the free-market gang had their “reform” blueprints drawn up– all they needed was to get rid of Muldoon.” (Muldoon was the National party’s Prime Minister at the time).
“So the rooster hatched to get rid of Muldoon was the NZ Party founded by Sir Robert (Bob) Jones,” said Bob.
“Get the picture?” my friend asked. “Don’t be so naive as to say humans don’t conspire. Even the experts agree conspiracies do happen.” 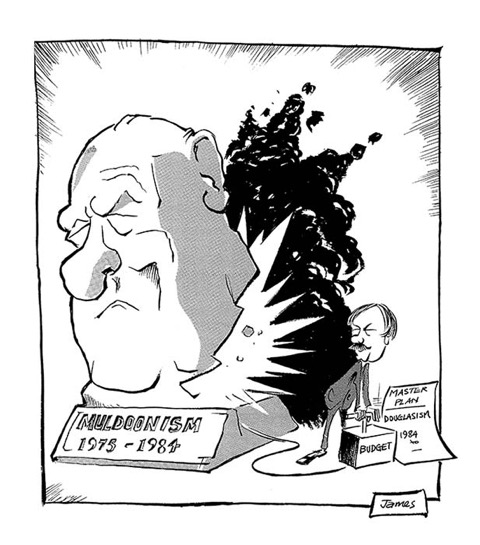 The Plan is Hatched to get Rid of Muldoon
Conspiracies such as the Watergate scandal in the US do happen, but because of the difficulties inherent in executing plans and keeping people quiet, they tend to fail.  When conspiracies fail—or are otherwise exposed—the appropriate experts deem them as having actually occurred .
A conspiracy theory refers to an allegation of conspiracy that may or may not be true.
Then there is conspiracy belief.  For example, apparently about 60 percent of Americans continue to believe that the CIA killed President John F. Kennedy and in the run up to the 2016 European Union membership referendum in the United Kingdom, about 46 percent of those intending to vote  believed that the vote would be rigged.   Each conspiracy may or may not be true and either way may never be revealed, more so today by a lack of investigative journalism.
And currently in New Zealand with a media, “bribed” to be compliant with government.
“After all, elections and winning power involve conspiring,’ said Bob.
An election strategy manual says “the basics of any election campaign are deceptively simple. All campaigns must repeatedly communicate a persuasive message to people who will vote. This is “the golden rule” of politics. A political campaign is a communication process – find the right message, target that message to the right group of voters, and repeat that message again and again.”
““Repeat a lie often enough and it becomes the truth”, is a law of propaganda often attributed to the Nazi Joseph Goebbels,” wryly laughed Bob.
Of course, governments hide all types of secrets, sometimes to protect national security, sometimes to suit their own agenda to maintain control of power.
Democracy a Problem?
But when legitimate secrets do get exposed, it makes people suspicious. Brains start to wonder – if they hid this fact, what’s stopping them from hiding even more information?
As one analyst in 2017 said the Mont Pelerin Society saw that democracy, rather than being either a mere nuisance or an irredeemable obstacle that must be rejected wholesale, posed a genuine problem for their aims.
Democracy can be under threat from the politicians who are elected by democratic election to uphold the principles of democracy.
Very recently New Zealand’s government passed the “Traffic Lights” bill completely by-passing the accepted role of a select committee to hear the publics’ viewpoints.
Speaker Trevor Mallard immediately lashed the Labour Government for its urgent passing of Covid-19 “traffic light system” legislation, though he did allow the law to be passed.
The legislation that would seriously curb the freedoms of unvaccinated people. Opposition MPs legal experts and the Human Rights Commission all condemned the government move.
“There has not been a more important piece of legislation passed by Parliament this year, yet we’ve done it in 24 hours without consultation,” Victoria University law professor Dr Dean Knight said.
I felt like a “breather” from what I had just been told.
“Look Bob,” I said. “Lets go fishing. I need to do some contemplating as the Patron Saint of Angling Izaak Walton said in his book.”
“Aha!” exclaimed Bob, “Old Izaak himself needed to do some thinking about politicians and conspiring.”
He flipped over the pages of a copy of Izaak Walton’s “The Compleat Angler” published in the 17th century. Quickly he found the page and stabbed his finger at it.
“Look what Old Izaak said.”
There it was.
“No life, my honest scholar, no life so happy and so pleasant as the life of a well-governed angler; for when the lawyer is swallowed up with business, and the statesman is preventing or contriving plots, then we sit on cowslip-banks, hear the birds sing, and possess ourselves in as much quietness as these silver streams, which we now see glide so quietly by us.”
Yes – “the statesman is preventing or contriving plots.” 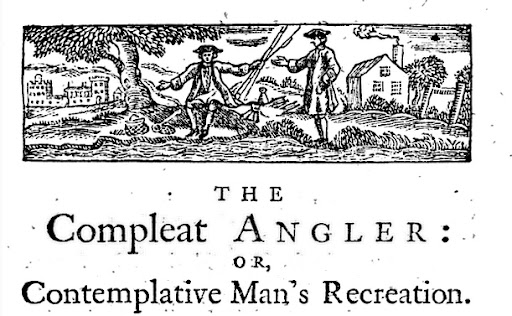 9 Responses to Oh No, Not Another Conspiracy Theory!