Posted on 20-06-2022 by Guest
Book Review: “Stories from Our Back Roads” by Ray Stone. Two volumes at $49.99 each, i.e. North Island and South Island. Reviewed by Tony Orman
Here’s a twin set of terrific books on driving back country roads and 4WD tracks. Many of the routes author Ray Stone describes in detail some which give fascinating insights into the history and often pass through scenic wilderness and near some promising trout fishing spots.
One volume covers the South Island, the other the North Island.  The text is detailed with invaluable advice particularly on safety hints, relative to avoid getting stuck. Excellent maps show the route and features along the way. A very impressive feature is the meticulously researched historical background of the routes, even including some such as the murder by the Burgess gang on the Maungatapu Track in Marlborough’s upper Pelorus River valley and a murder and suicide in the upper Wairau valley.
Highly recommended. 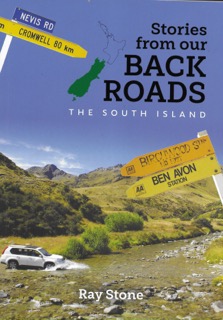