Posted on 19-11-2021 by Guest
Press Release Sporting Hunters Outdoor Trust
A call by Forest and Bird to eradicate wild animals such as deer and chamois to combat global warming is out of touch with reality says a recreational hunting advocacy.
Laurie Collins, convenor of the Sporting Hunters Outdoor Trust (SHOT) says the claims by Forest and Bird were “typically wacky” but not surprising.
Previously Forest & Bird Chief Executive Kevin Hague said new Forest and Bird report gives a stark warning that ongoing damage by introduced browsing pests causes native habitats to bleed stored carbon.
“The report, ‘Protecting our Natural Ecosystems’ Carbon Sinks’ reveals the West Coast’s kāmahi-podocarp forests alone are presently bleeding 3.4 million tonnes of CO2 every year because of browsing from deer, goats, chamois, and possums,” said Kevin Hague.
Ludicrous
Laurie Collins said Forest and Bird’s claims were ludicrous in the light that New Zealand’s vegetation evolved over millions of years under a strong browsing regime by moas, other ground herbivore birds and canopy birds such as kereru (pigeon).
He said eminent NZ ecologist the late Dr Graeme Caughley had estimated there were at least six million moa comprising several sub-species that browsed tussock tops, forest, scrub and lowland vegetation. Landcare Research in 2000 estimated there were about 250,000 wild deer.
“So the browsing impact is minimal compared to moas and other birds,” said Laurie Collins. “If moas hadn’t been eliminated by hunting and habitat destruction by burning, would Forest and Bird be complaining and wanting moa eliminated?”
“Forest and Bird’s latest press release echoed calls by two director generals of DOC, some years ago, to eliminate deer and other wild animals due to farting and belching. How much bodily functions did six million moa do?”
Climate Change Minister’s Trip
Laurie Collins said Forest and Bird’s wild claim was made even more absurd by recent disclosure of Climate Change Minister James Shaw and an entourage of eight travelling to Scotland by jet plane to attend climate change talks.
“Kevin Hague should be bailing the Minister and his bureaucrats up against the wall instead of blamng wild animals,” he said.
Kevin Hague as a former Green MP and parliamentary college of current Climate Minister James Shaw, knows well the Green Party’s agenda is to push “ecological doom agendas” to create “imaginary hobgoblins” in order to maintain funding aid. If the Greens were realistic about carbon sequestering they would advocate for the recovery and development of peat swamps which are enduring carbon sinks for as long as the peat swamp remains. In contrast trees and vegetation are only effective for the life of a tree said Laurie Collins.
“Instead of being realistic and constructive Forest and Bird opts to fan the flames of the old 1930s anti-introduced wild animal phobia,” he said.
Contact; Laurie Collins 03 782 8647 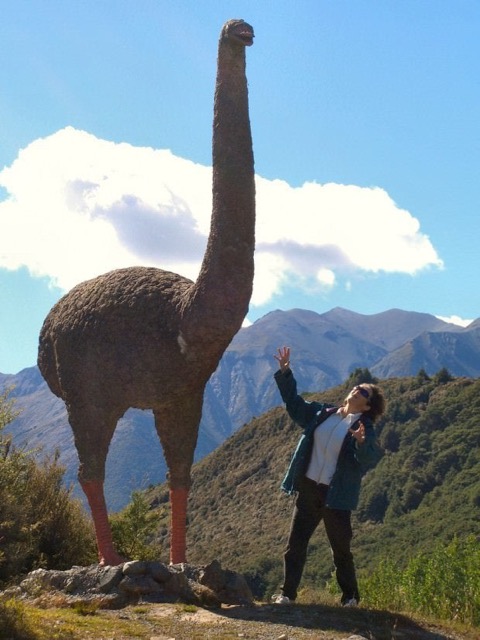 Statue of a Moa – extinct flightless bird was the dominant herbivores in New Zealand’s forest, Hunted to extinction by Māori 1300-1440.