Watergate – The Daddy of Conspiracies

If you are a conspiracy denier, then this a book for you.

If you are a conspiracy believer or even theorist, then this is a book for you too.

Watergate of course, became the subject for an excellent movie (“All the President’s Men”), starring Robert Redford and Dustin Hoffman. Also there’s been several books on the political scandal that emerged.

The uncovering began in the early hours of June 17, 1972, when a security guard entered six words into the log book of the Watergate office complex that would change the course of history -“1:47 AM Found tape on doors; call police”.

Police found and arrested five intruders, and charged them with attempted burglary.

Over the next two years, the aftermath of that night of June 17, 1972 and the five arrests would lead to dozens more arrests, an alleged kidnapping, FBI and congressional investigations, a Senate hearing, and bombshell testimonies from the highest levels of political power . As pressure built, cover-ups and diversionary tactics such as “dirty tricks” and character assassinations occurred and interference by the president and his top officials of vital tapes were revealed. Subsequently it would sink a vice-president and a half-dozen Cabinet officials, lead to the jailing of an FBI director and end a US presidency.

Importantly it would emphasise that given human foibles especially when driven by lust – in this case for power – that people even in high authority can shed any respect for truth and loyalty to the public and each other.

The narrative with compelling characters, who range from criminal and flawed to tragic and heroic, plays like a Shakespearian tragedy.

Author Garrett M. Graff with meticulous and exhaustive research delves into the full extent of the scandal from the botched burglary to the official denials, evasion and dodging by US president Richard Nixon and top officials.

As one commentator put it, the book reveals “the cesspool of deceit, intrigue and criminal behaviour that were associated with the seemingly innocuous break-in and the cover-up.”

It is an intriguing true political thriller.

Award winning author Garrett Graf skilfully gives life to the characters, including the psychologically tortured and flawed President Nixon and his doomed aides, special prosecutors, groundbreaking investigative journalists reporters Bob Woodward and Carl Bernstein of the “Washington Post” and Mark Felt, an associate director of the FBI whose identity as “Deep Throat” was kept hushed for decades and even a young impeachment aide named Hillary Rodham who later became Hillary Clinton.

Written in gripping fashion as chapters are read, the book gets hold of the reader revealing the true story of a political scandal that reverberated not just in the US but around the world.

So what’s the relevance to New Zealand readers? Well politics is politics whether in the US or New Zealand. Politicians are politicians whether there or here or anywhere.

Then there’s the inescapable fact that people do conspire. In earnest – if not heated – discussions on politics, the dictates from governments meant to be serving the public – not mastering them – the word “conspiracy” may frequently crop up.

Too often the supporters of the government, the establishment or the dictatorship (call it what you may) will defensively sneer and indulge in name calling such as “You’re a conspiracy theorist”. It’s akin to hate speech, an inference that conspiracies are a figment of an over-fertile imagination.

But conspiracies do happen and here’s a book that details a prime example in politics  i.e. Watergate.

Despite other Watergate books, the recent release of more Nixon tapes and the revealing of the identity of a mysterious informant code-named Deep Throat himself, was the impetus for such a book.

As the 800 odd pages are turned, “Watergate” becomes increasingly absorbing to the point of being compelling and irresistible. It should be read by all, but especially politicians.

New Zealand politicians are not exempt. 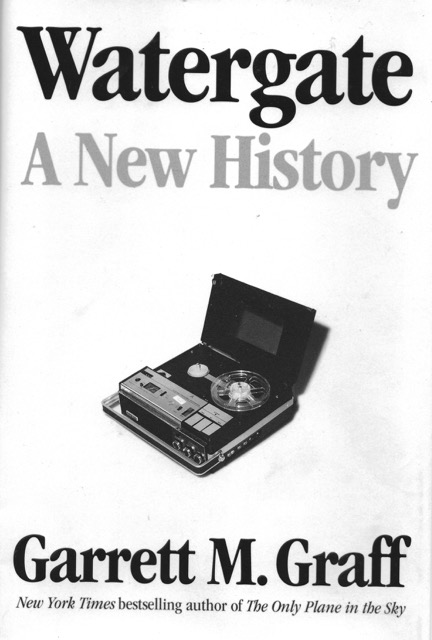 3 Responses to Watergate – The Daddy of Conspiracies