Posted on 26-02-2021 by Guest
Opinion by Tony Orman
The Quota Management System for managing sea fisheries was introduced in 1986.
The principle behind the QMS is commercial fishers own (or lease) the right to catch a certain proportion (quota) of the Total Allowable Catch (TAC) of a certain species of fish. These quotas can be freely traded. Based on “Rogernomics” economic theory, market forces are assumed to achieve economically optimal outcomes.
Governments and their fisheries ministers have lauded the quota management system, based on “spin” provided by ministry bureaucrats. It is a classic example of the television comedy classic “Yes Minister.”
The praise is hollow and without substance. The reality is as I pointed out at a meeting of sectors in 1986 introducing the QMS, the free market trading would result in giving power to corporate companies. Sadly it has happened. Reportedly some 80% of quotas are owned by corporate fisheries companies. Corporates donate to political parties and MPs and wield strong influence on both the ministry and ministers of fisheries.
It was only a short several years ago, I talked to a senior National Party MP about mismanagement of Marlborough’s blue cod fishery accompanied by the discrimination against the recreational public and the inertia by fisheries ministers to reject clearly undesirable rules. The ministry, instituted ludicrous, damaging measures despite recreational  groups such as the Marlborough Recreational Fishers Association, pointing out the folly and the destructive consequences.
Golden Eggs Broken
A graphic example was the ministry bull-dozing in a “slot rule” which limited recreational fishers to blue cod between 30 cms and 35 cms. Any blue cod under 30 cms or above 35 cms had to be returned.
The foolishness was caused by blue cod in the 30-35 cm bracket being mostly breeding females.
In short recreational anglers were being forced to target and kill breeding female blue cod – the ‘goose that lays the golden egg.’
Recreational fishers went public. Two comments published were “The slot rule was ridiculous – an experiment that didn’t work.”
Another said “Whoever dreamed up the slot rule should be held to account. It’s been a disaster in fishery management.”
One charter operator reportedly had returned 50 fish before they caught one within the slot.
Despite the warnings from recreational anglers and groups, the ministry persisted with the slot rule for four long damaging years from 2011 to 2015.
“Yes Minister” Is Well
But to return to the National MP I spoke to. My question was about ministers, accepting without question, the advice from ministry bureaucrats.
My question was thus:- “Why don’t ministers stand up to these bureaucrats, in the public interest? It seems ‘Yes Minister’ is alive and well in Wellington?”
The MP wryly smiled and replied “Yes it is.” 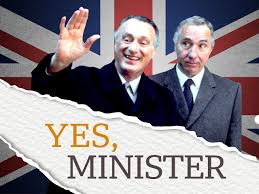 MP Jim Hacker and Sir Humphrey (right) of “Yes Minister”
The ministry, with their edicts blindly accepted by a succession of fisheries ministers, both Labour and National governments, brought in a number of measures that had no sound scientific basis or were practical.
The blue cod ban was introduced in 2007 by Labour fisheries minister Jim Anderton. It was based on a woefully amateurish scientific potting survey by NIWA. The methodology was so flawed as to be public castigated by a scientist and obvious even to a lay person.
A group of scientists in 2017 rebutted the QMS and its claims it was managing fisheries well.
“Fish stocks are nowhere near as healthy as suggested —-there is a lack of scientific data to correctly run the QMS. Three quarters of fish stocks have no formal or detailed assessment and very few have independent research surveys.”
“Most assessments rely on industry self-reported catch and effort data, rather than independent surveys. This is a dangerous strategy, as shown by the collapse of the Canadian Newfoundland Cod stocks in 1992. At that time, fisheries managers chose to believe industry data showing increasing catch per unit effort, rather than scientific surveys suggesting precipitous decline.”
Election Promise
In 2017 in the run-up to the general election Labour promised a thorough independent review of the quota management system. Labour was the major party in the subsequent coalition government formed with the Green and NZ First parties.
Yet early 2019, Minister Nash announced he had abandoned Labour’s election pledge to review the QMS. It was of deep concern that the minister dishonoured this pledge by a simple comment in a newspaper.
At the time, the Marlborough Recreational Fishers Association wrote to government deploring the broken promise. With ailing fish stocks, it would be logical to review the system. Instead the minister – and government – sought salvation in fish farming i.e., aquaculture.
Stuart Nash was a weak and willing victim to the “Yes Minister” virus.
He backed off installing cameras on commercial boats – another broken promise by Labour.
New Promise?
Nash is no longer the fisheries minister – thank goodness. David Parker is the current minister with the intriguing title of “Oceans and Fisheries Minister,” which suggests a new ecosystem based approach, a line that has been so often completely lacking in ministry management and of course ministerial advice to ministers.
Sir Humphrey was the arch, scheming devious bureaucrat in the television “Yes Minister”, pulling the wool over the eyes of MP and eventual prime minister Jim Hacker.
Fisheries Ministry bureaucrats have been deceiving and deluding ministers for years now.
It is time for a review of the whole fishing industry particularly the QMS and also “a search and destroy” of any  Sir Humphreys that might be lurking within departments.
And while the review is happening it would be missing a golden opportunity not to examine the role of corporate fishing companies in making donations to political parties and MPs in order to angle for special favours from government?
The victim while the present dysfunctional system continues, is the public’s fishery.
Nor is aquaculture the saviour as Stuart Nash naively accepted.
Aquaculture has all sort of environmental challenges. A classic case is corporate King Salmon, in the Marlborough Sounds, which has been suffering heavy fish mortalities and trucking large tonnages of dead fish to landfills, quite apart from coastal water and sea bed contamination.
As one USA fisheries expert told me in the trout farming battle years ago “Trout farming is capital intensive, high frisk and marginally economic.’
To which I would add “Fish farming is no substitute for mismanaged sea fisheries.” 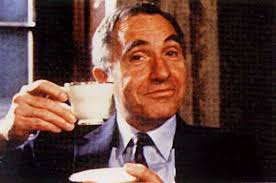 Do Sir Humphrey’s Lurk in the Fisheries Ministry?
This entry was posted in Home. Bookmark the permalink.