Is Democracy Under Threat from Today’s Politicians?

Posted on 26-02-2021 by Guest
Opinion by Rupert Pye
In 2017 former prime minister Sir Geoffrey Palmer wrote a startling blog post expressing concern about the state of democracy in New Zealand. It surely should have been headline news but it wasn’t. Which raises a large question marks about the media’s competency and sense of responsibility.
Palmer’s statement was under a national government, led by John Key.
Palmer had very good reason to be concerned. One act by the government was totally unprecedented.
Almost eleven years ago, on April Fool’s day 2010, Nick Smith, then minister for the environment and government sacked the democratically elected Environment Canterbury (ECan) council and replaced it with state commissioners by passing the ECan Act.
The move outraged the Law Society Rule of Law Committee which denounced the ECan Act as repugnant to the Rule of Law. Most were appalled.
Dictatorship?
Other issues relating to the outdoors and environment will suffice.
In April 2016 Nick Smith also removed the right of local councils to consider and hear submissions on 1080 poison aerial drops and put the final say with central government which became solely responsible for 1080 poison and pest control methods – with no reference to the public. Strange for a National government – it and the ECan takeover were dictatorial state control.
At the time, Waikato regional councillor Clyde Graf told Radio NZ the change withdrew the ability of the community to engage at the consent process, and stopped local government from being able to manage their own pest control.
In effect, the public’s right to comment was abolished.
Kangaroo Court
There was the 2004 ERMA review of 1080 which was a “kangaroo court” with submitters restricted to only five minutes. it was a token gesture to consultation. – lip service only.
The National government was voted out in 2017.
But the new coalition government of Labour, Greens and NZ First continued the government trend of diminishing democracy.
Firearm law changes following the Christchurch March 15, 2019 mosque tragedy, were rushed through in just a few days. Over 12,000 submissions were considered in just two days – defying credibility.
It’s not outdoors related so much but today – just the last week –  the Labour government pushed the the Maori Wards Bill though its final reading in Parliament in just a few days. There was virtually no meaningful government instigated public debate.

Democracy is being eroded and harder to find
Brazen Hijack
Jordan Williams executive director of the Taxpayers’ Union said “This law is a brazen attempt to hijack local democracy, and the use of Parliamentary urgency betrays of the promise of open and transparent government.”
Ignore the issues whether it be the firearm laws, 1080, ECan or Maori wards, what is important and so very alarming is the erosion bordering on abandoning democracy.
Some columnists have examined the erosion of democracy. A number have identified complacency by the public or in other words apathy. There is deep concern New Zealanders are oblivious. They think New Zealand has a strong democracy and therefore don’t focus enough attention on the need for protections against undemocratic behaviour and corruption.
People’s Apathy
Recently respected writer and columnist Karl du Fresne looked at complacency, saying: “One thing we do very well in this country, besides rugby, is evasion of responsibility. We get reports and inquiries, hollow apologies and hand-wringing … and then it’s back to business as usual”. He found there is a glaring “accountability deficit” throughout New Zealand.
The Council of Outdoor Recreation Associations of New Zealand (CORANZ) raised red flags last year that parliament’s select committee democratic process was being undermined to the detriment of the public giving submissions.
Current CORANZ Chairman Andi Cockroft made an oral submission to a select committee dealing with the Resource Management Act (RMA).
After being beforehand, granted 15 minutes speaking time the chairman interrupted Andi Cockroft’s submission after five minutes and said the committee had heard enough thereby cutting the oral presentation short by ten minutes.
It was another insult to democracy.
Contrast
The five minutes now regularly accorded to submitters by select committees is in strong contrast to years ago when select committees listened to an oral submission for half an hour, an hour or more.
Tony Orman, who has over decades made several submissions to select committees, wrote on the CORANZ website some months ago, saying “the public believe Parliament is the place of democracy – where you could get a fair hearing from elected representatives based on a historical and moral constitution of honour, truth and justice. It is not a charade.”
But he is wrong, it is a charade – more than a bad joke.
Little wonder the public rate politicians, political parties and governments as among the most untrustworthy. 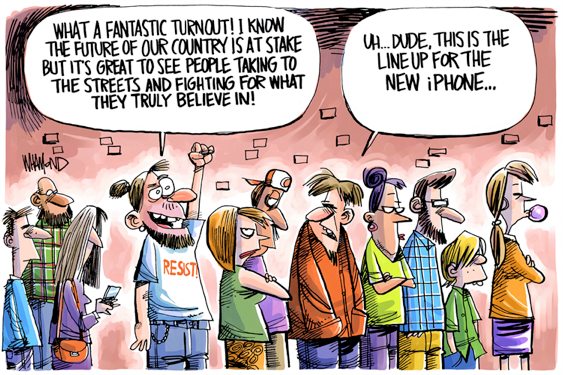 Is apathy by people and failure to hold politicians to account a major obstacle to retaining democracy?
This entry was posted in Home. Bookmark the permalink.

21 Responses to Is Democracy Under Threat from Today’s Politicians?