Posted on 05-04-2021 by Guest
“The Treaty – Basic Facts” by Mike Butler, published by Tross Publishing, Wellington. Price $25. Available in most book shops or through the website <www.trosspublishing.co.nz>
reviewed by Tony Orman

The Treaty of Waitangi is currently the subject of much discussion fuelled by demands from tribal elite. Open debate has largely been diminished by the tendency to term anyone who argues for a united “one New Zealand” to be shouted at hatefully with accusations of racism. Author Mike Butler is a brave man. He describes his book as “a timely reminder about the basic facts of the Treaty of Waitangi.”

The book delves back to the original texts of the treaty by recalling evidence of what the sixteen 1840 chiefs said about it. The author does this with no apparent bias for he quotes (from Missionary William Colenso’s translations) as to those chiefs who supported the treaty and those who did not. Interestingly as each chief signed Captain William Hobson, said in maori, “we are now one people.” That has a familiar ring.
Two chiefs Marupo and Ruhe made long speeches against signing but both however subsequently signed. On February 6, 45 chiefs signed the maori text of the Treaty of Waitangi.
Hobson then took the treaty around the country. Between February 6 and June 23, and 512  chiefs signed.
In the 20th century things changed with unrest generated.
“It was former Prime Minster Geoffrey Palmer who set the treaty industry into motion—Palmer wants a written constitution that enshrines the Treaty” but author Mike Butler argues the “treaty is not in any meaningful sense a constitution—All the treaty says is the Queen is sovereign and Maori have rights as British subjects which includes the right to own property. Any constitutional arrangement that separates governance along racial lines creates a racially divided nation. A house divided against itself will fall.”
The author exposes the reinterpretations which could and did change original meanings. He is critical of “fudges” by “politicians, academics and the media”.
“The 30 year social experiment using the treaty and reinventing New Zealand’s history has gone on for long enough.”
Author Mike Butler has done a probing, thought provoking exercise which poses several questions such what are treaty principles, what is the Waitangi Tribunal, should NZ adopt a treaty-based constitution, should the treaty be understood in its context of be subjected to perpetual reinterpretation according to the current political orthodoxy and other pertinent questions.
Every New Zealand should read”The Treaty- Basic Facts” –  and then think. As the author puts it “The questions raised in this book touch everyone.” It’s that important.
A small criticism, a book of this nature should have had an index. 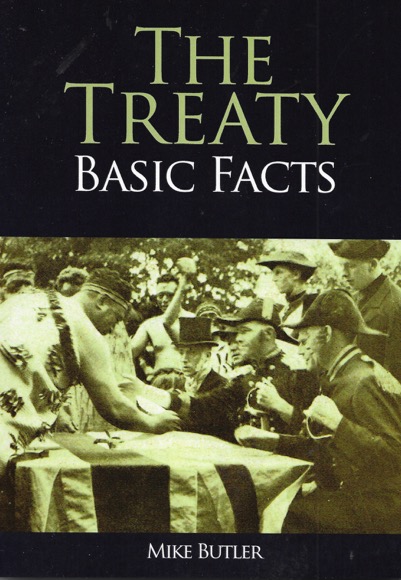