Posted on 17-12-2020 by Guest
Press release by Legasea
Coromandel residents are concerned about the noticeable decline of scallop numbers on the eastern side of the Peninsula. This is likely due to years of unconstrained harvest and destructive dredging, which decimates scallops and crabs, crustaceans, other shellfish and sea life that inhabit the seafloor.

Opito Bay ratepayers have tried to engage with Fisheries New Zealand over their concerns about scallops for several years, without success.

Now, banding together, locals have initiated a programme to restore the scallop beds. It begins by asking everyone over the summer period not to harvest scallops. To give them a break.

The request for everyone to respect a voluntary no take of scallops is followed by a survey to establish how many scallops actually remain in Opito Bay. This survey was officially launched at a ceremony this morning by Ngāti Hei.

“Ngāti Hei people have been aware of the depletion for a long time. We haven’t had scallops wash up onto Kūaotunu Beach in over 10 years so we are pleased the community is willing to contribute to their restoration by surveying scallop numbers and supporting a rāhui,” says Ngāti Hei kaumatua, Joe Davis.

The survey results, which will be available in the new year, will help inform Ngāti Hei and the local community as they look to impose the rāhui, which will ban the harvest of scallops from the Opito Bay area. The community supports this approach, with over 90% of ratepayers supporting an immediate voluntary ban on taking scallops from Opito Bay and surrounding waters. Letter to Minister
Earlier this month a letter outlining the community’s concerns was sent to David Parker, the Minister of Oceans and Fisheries. In addition to Ngāti Hei and Opito Bay Ratepayers Association, the Mercury Bay Sport Fishing Club, Tairua-Pauanui Sport Fishing Club, Whangamata Ocean Sports Club, New Zealand Underwater Association and Spearfishing NZ, New Zealand Sport Fishing Council and LegaSea all signed the letter.“We advised the Minister that we have watched the scallop beds in Opito Bay diminish in size and abundance over the years. But we’re not alone, the scallop beds in the surrounding area are also depleted, so those fishers are now heading into Opito Bay looking for any remnants. It’s just not sustainable,” says Opito Bay Ratepayers Association chair, Chris Severne.Dive Zone Whitianga will conduct the scallop survey immediately on behalf of the community, with the support of the New Zealand Sport Fishing Council and its public awareness group LegaSea.No Dredges
Earlier this year, in a proactive move, the New Zealand Sport Fishing Council endorsed a policy encouraging recreational fishers to dive for scallops and not scallop dredge.“Our community is increasingly concerned about the deteriorating state of inshore waters, we know seafloor organisms are crucial to the overall health of the marine environment so it’s exciting to see our members embracing progressive policy and encouraging change.” says New Zealand Sport Fishing Council president Bob Gutsell.LegaSea is concerned that unconstrained commercial fishing combined with the ongoing use of the Victorian Box Dredge as the harvest method of choice has altered the state of the seafloor.“Commercial catch limits have remained high while actual harvest declines. This is a failure of the Quota Management System. Mismanagement of scallops has seen the local commercial fleet dwindle from a peak of 23 boats, down to four this season,” says LegaSea spokesperson Sam Woolford.“This is clearly not economically or environmentally sustainable. We hope commercial interests will see the value in a conservative approach and join the community in giving the scallops a break over this summer.“While the Quota Management System is failing Kiwis, it’s motivating to see that the local community rallying together and taking control to ensure their scallop beds are not wiped out like we have already seen in the Marlborough Sounds, Tasman and Golden Bays, and the Kaipara Harbour,” says Sam Woolford. 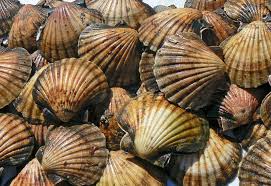 Scallops – no dredging policy
This entry was posted in Home. Bookmark the permalink.