Posted on 20-01-2021 by Guest
Diverse native wildlife on Mount Pirongia in South Waikato can flourish this summer, thanks to a successful pest control operation, says the Department of Conservation (DOC).
But the department’s claim are seriously flawed say two outdoor organisations.
The Council of Outdoor Recreation Associations says the claims do not “statistically” add up while the Sporting Hunters Outdoor Trust said the department’s claims were simply “demonising” the possum plus using 1080 was damaging to all life including invertebrates, birds and animals.
“DoC constantly claim the possum is a predator when it’s a herbivore,” sad Tony Orman Trust spokesman.
He said Landcare Research studies had shown no presence of meat, feathers or eggs in autopsies on possums. Landcare had told DoC as far back as 1994 at a departmental “Possum Pest Workshop” that possums were not “rapacious consumers of foliage”.
Browsing of the forests was millions of years old by several moa species and vegetarian birds such as kokako and kereru (pigeon). NZ’s vegetation evolved and functioned under a strong browsing regime.
Collateral Damage
Andi Cockroft, CORANZ chairman, said DOC did not seem to understand the collateral damage 1080 did, particularly by indiscriminate aerial scattering.
“The wild celebration that they can now hear the hauntingly beautiful kokako – after it has been reintroduced. Basically it’s  kill everything then reintroduce a species with few if any competitors left after poisoning. Wonder where the Ruru (morepork) figures in this futile, damaging exercise,” he said.
As part of DOC’s ongoing nationwide Tiakina Ngā Manu programme, predator control was carried out at Pirongia Forest Park in September 2020, using aerially applied 1080 over 14,000 hectares.
The work says DoC, is part of long-term conservation efforts at the site, which is habitat for a huge range of forest birds, insects, lizards and plants including, threatened species such as pekapeka (bats), kōkako and Dactylanthus-a rare parasitic plant.
“Possum monitoring, before and after the control operation shows we’ve reduced the possums in the forest park, providing rata trees, Dactylanthus, kokakō and a multitude of other valuable New Zealand species the opportunity to thrive,” says DOC Biodiversity Ranger Cara Hansen.
Monitoring
Possum monitoring was undertaken by an independent contractor using leg hold traps spread throughout the forest park in the weeks after the Tiakina Ngā Manu operation was completed; 240 traps were checked over three nights and no possums were caught.
Monitoring at the same site, undertaken in January 2020, showed 5.4% of the traps had caught possums.
“This further demonstrates the value of our predator control operation and the detailed and lengthy planning and consultation we put into undertaking that work,” Cara Hansen said.
But Andi Cockroft challenged the integrity of the monitoring.
“Firstly, setting only 240 traps over that area would statistically only give us around a 7% margin for error with 95% confidence – sorry statistical chatter,” he commented.
Secondly, 240 traps with 5.4% catch are well inside a 7% margin for error. This means one could expect between 0% and 12.4% in any repeated catch. DoC then trapped after the drop and found nothing said Andi Cockroft.
Meaningless
“So again assuming a 7% error rate, we could realistically expect between 0 and 7% catch rate if repeated. So there could easily be possums, even more than before, they just haven’t detected them this time. Single tests are also pretty meaningless. In essence, their “statistics” would fail 1st-year University,” he said.
Tony Orman said Landcare Research studies had indicated 1080 drops disrupted the food chain equilibrium with disastrous consequences. Major studies in 2007 revealed when 80% of rats are killed by aerial 1080, the surviving 20% quickly flourish with less food competition and mushroom into a population explosion that within four years results in 3 to 4 times original numbers. Then stoats whose main prey are rats, explode in numbers.
“All DoC has achieved in ecological mayhem with rat and stoat plagues. It’s mad, wasteful of public money and ecologically devastating,” he added.
Andi Cockroft says DoC is just seeking vote allocation money and will present “fairy tales” to get it.
”Of course encouraging an artificial rat and mustelid plague every 4 years by these regular applications of 1080 is completely self-serving to DOC’s survival as a money-go-round,” he said. 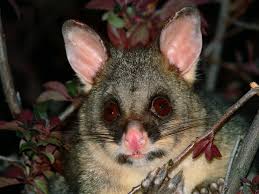 Possums are herbivores not predators
This entry was posted in Home. Bookmark the permalink.