Don’t be an Ostrich – Get Involved!

Posted on 23-11-2020 by Guest
Opinion by Ben Hope
Robert M Hutchins noted American educational philosopher once said  “The death of democracy is not likely to be an assassination from ambush. It will be a slow extinction from apathy, indifference, and undernourishment.”
Think of general elections – sadly apathy is always prominent with almost one in four people eligible to vote, not bothering to.
Apathy seems to be more prevalent today.
Back in NZ Deerstalkers Association history, hunters had a strong presence in elections such as in the 1970s. The late John B Henderson, a forthright and inspirational NZDA president back in those decades was one of the three leading figures in “Save Manapouri” campaign, which opposed the government plans to raise Lake Manapouri  to supply discounted electricity to a foreign consortioum Comalco (now Rio Tinto) for the corporate’s planned smelter.
Victory
The battle was won and Manapouri in the public’s national park was saved from raising. But it was only by getting involved politically. NZDA vigorously lobbied politicians. The trout fishing public rose up against the National government’s plans to introduce trout farming. Trout anglers had lobbied Labour leader Norman Kirk.
The result was in 1972 the Norman Kirk-led Labour government swept to power with outdoor issues such as Manapouri, trout farming and selling Crown (public) lands to a wealthy foreigner to exploit fishing and hunting being three key issues.
Newspapers such as the “NZ Herald” and the “Hawkes Bay Herald Tribune” in editorials after the election defined the voting power of the outdoors public as strong factors in changing the government and defeating plans to raise Manapouri, to introduce trout farming and allow a foreign to profiteer from exploiting hunting and trout fishing values at Upukerora, Te Anau.
In 1972, John Henderson urged anglers and deerstalkers to “bring the debate to the public for its judgement and never to be duped into believing that politics and the environment are other than cause and effect.”
Yes, “politics and the environment are simply cause and effect.”
It means politics is unavoidable in issues whether firearm laws, 1080 poison, plundered sea fisheries, degraded rivers, access rights, heli-hunting, anti-deer policies or whatever issues confronting the outdoor recreation public.
Election Charter
The Council of Outdoor Recreation Associations of New Zealand (CORANZ) has endeavoured to define the issues and seek outdoor recreation and environment policy details from political parties by way of an election charter.  CORANZ has defined  key issues for parties to comment on. Points ranged from clean rivers, to full legal recognition of game animals and trout, to misuse of poisons, reviewing DOC’s priorities, calling for stricter controls on foreign ownership, Treaty of Waitangi and even calling for a population policy and  a better measurement of national progress with quality of life equal with economic measurements.
As was proved in election year 1972, the outdoor vote collectively is potentially a massive one – arguably today towards a million. With such potential potency, it could have had major impact in attaining sound environmental and outdoor recreation policies. But it failed.
Unless hunters and anglers force debate on issues, politicians will not take notice.
They only take notice if there’s votes to be gained. Votes are the life blood of politicians and political parties.
Numbers matter
That’s why numbers are so important. The more people speaking out and pushing, the bigger the voting impact, the more notice politicians take.
The less numbers, politicians and bureaucrats, take less notice of public opinion. 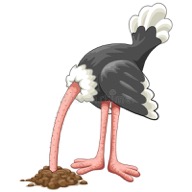 In your own personal reflection, question what legacy do you wish to leave for your children and grandchildren.
As John Henderson said decades ago, get involved and don’t shun politics.  Politics is not a dirty word. It’s just democracy. It starts with your club and national outdoor organisations.
Get active, take an interest in issues and stand up and be counted.
Don’t be an apathetic ostrich with head in the sand.
This entry was posted in Home. Bookmark the permalink.

3 Responses to Don’t be an Ostrich – Get Involved!