Siltation a Major Environmental Problem mostly Unseen and Out of Mind

Posted on 21-11-2020 by Guest
Opinion by Tony Orman
Satellite imagery carried out by the Hawke’s Bay Regional Council reveals hundreds of thousands of tonnes of sediment in some of our major rivers and spewing out 20 kilometres offshore following the region’s recent storm.
The satellite imagery also shows sediment clogging up the region’s major rivers, Tutaekuri, Ngaruroro and the old Ngauroro course at Clive. a
Estimate suggest it was “hundreds of thousands of tonnes” pushed out to sea.
It’s nothing new. Many regions are suffering from silt-laden runoff. While the Hawkes Bay event was a catastrophic rainfall deluge, other regions have suffered from silt runoff from forestry workings, such as clear felling harvesting of pine plantations.
The Marlborough Recreational Fishers Association in 2015 publicly expressed deep concerns about the impact of large scale commercial forestry on the environment in Marlborough and particularly the Marlborough Sounds where siltation has been on-going and recently accelerated especially in the Pelorus Sound.
The Marlborough District Council has received several scientific reports of the problem over the last decades but seems loath to act. It may be because the council has invested in large scale exotic forestry itself?
A case of Council being in the words of William Shakespeare “Hoist with his own petard”?
Plus below the water surface, it is “out of sight, out of mind.”
Back in 2015 the Marlborough Recreational Fishers Association’s then president Pete Watson said farming of mussels and oysters, as well as run-off of forestry sediment in the Pelorus Sound were contributing to poor water quality.
“The sea floor is nearly three metres deep with silt and mud now, nothing grows on that mud so there’s no bottom feed for the fish,” he said.
The fact is significant marine ecosystems are being degraded or lost at an alarming rate, with sedimentation from logging smothering some ecosystems.
© Clear Felling, Pelorus Sound 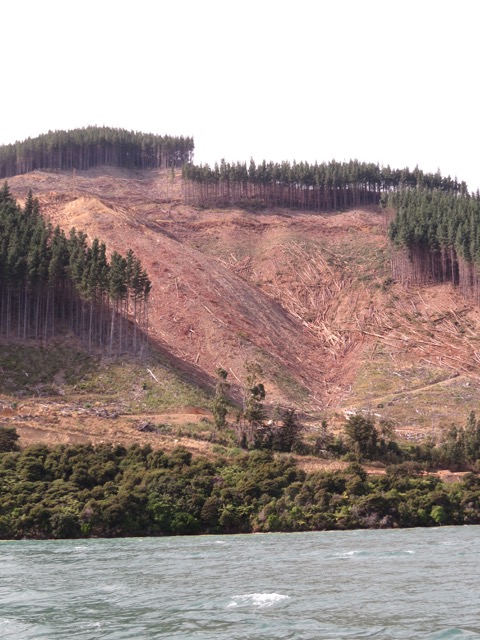