Time to Clean up Murk Around Political Donations

Posted on 23-11-2020 by Guest
Opinion by Tony Orman
Stuff ran an article in August 2017 on political party donations.
The first two paragraphs are worth noting:- “
Ask Sir Peter Talley if his fishing company is donating to New Zealand First’s political campaign and he will say “no comment.”
Try again and he’ll say, “Can’t you f…ing understand English?” and hang up the phone.”
The same Stuff article reported during the 2014 election that candidate donations showed Talley’s contributed $42,500 to the campaigns of nine candidates (mostly National) standing for regional seats. Three of these – Chester Borrows, Stuart Smith and Damien O’Connor (the only Labour recipient) – were members of Parliament’s Primary Industries Select Committee. Each received $5000.
The article said NZ First’s Shane Jones received donations but would not confirm who his donors were.
“Historically I have been supported by the fishing industry including Sealord and Talley’s. In my experience, I know of no instance where a political donor has been given a favour by an individual in parliament,”  Shane Jones was reported as saying.
Did Shane Jones think the journalist and the public were naive?
However do not entirely blame the wealthy donors or the MP and political party recipients.
System to Blame
The system allows them to make heavy donations. The system seems to make it difficult for the public to get exact details.
As best I can ascertain, the “system” operates like this:-
(A) Political parties in New Zealand only need to declare private donations which exceed NZ$30,000 over a period of 12 months.
(B) Every year parties must report every donor and contributor who donated over $15,000 during the year, every anonymous donation over $1500 and every overseas donation over $1500.
Big Money
The donations to parties run into substantial amounts. In 2019 Labour received $783,000, National $1.22 million and NZ First $369,000 as examples.
But there seems no way to tell the absolute total of donations to each party or which individual persons or corporates donated.
It is time for government to clean up the murky waters around political party donations.
Corporate commercial fishing companies exert strong political pressure on government ministers and politicians. Often it’s done behind closed doors. “The Sunday Star Times” ran an article after the election about the big donations from corporate fishing companies naming Talleys as a substantial donor particularly to NZ First.
Play the Field
It goes something like this. A corporate company will donate to all parties with a chance of being in government. Then when a government is formed, the corporate can easily exert influence on the party, a MP or a group of MPs.
A Ministry of Fisheries official admitted to me personally that corporate fishing companies were able to exert considerable influence on ministry policy because of the political sway they had purchased with making donations. It was a big hindrance to fisheries management.
Surely it is well past time to clear the muddied waters around political donations?
The public deserve crystal clear water to see what is actually going on. 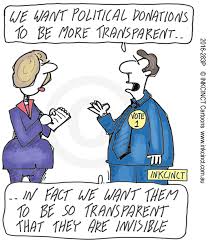 2 Responses to Time to Clean up Murk Around Political Donations