Posted on 04-03-2021 by Guest
Opinion by Ben Hope
There’s a disease far worse than Covid19 that can afflict anyone, anytime, anywhere.
It is called apathy. My Heinemann’s New Zealand dictionary defines it as “a lack of interest or energy.” The Collins English dictionary describes apathy as “absence of interest in or enthusiasm for things generally considered interesting or moving or important.”
While Covid19 causes consternation and stern government measures, apathy doesn’t. Politicians and governments usually love apathy because indifference by the people means they can virtually do as they like and ignore the public.
In the 2020 general election, 655,000 people enrolled to vote, couldn’t be bothered voting despite on-line voting allowing voters to vote over a period of weeks instead of the previous “one voting day at the local school or church” system.
The statistics of the 2020 election are interesting.
In the age bracket 25 to 44 years, about 25% were too apathetic to vote. Overall 655,00 or 18% did not vote.
Remember too that is of people enrolled to vote. There are a number who had not enrolled to vote.
Dictatorship
That air of indifference allows governments to become arrogant and can lead to a point of dictating to the public, i.e. dictatorship.
This is anathema to the concept of democracy which is meant to be the foundation principle of New Zealand’s society especially of an egalitarian, i.e. equal opportunity for all, regardless of wealth, class or ethnic background..
It raises the question, should a government dictate to the public or should the people tell the government what to do?
If you believe the government should be fearful of the wrath of the public and a subsequent backlash at election time, well you are out of step with political moods of the last few decades. Apathy is commonplace.
Looking back over the last decade, it’s plain to see.
In previous recent general elections a million New Zealanders did not vote or were even too disinterested to register as voters.
Selfish
Those one million are selfish. They do not care about tomorrow and the legacy they leave to their children and grandchildren.
They are short-sighted because they only live for today and are totally indifferent about the future, i.e. the children’s and grandchildren’s future.
It is not just general elections.
A total of 375,649 Aucklanders (35.26% of registered voters) cast their vote in the 2019 local elections. Some 65% did not vote.
Christchurch has a voter turnout of slightly better about 38-40% but that means the majority, i.e. 60% did not vote.
Within outdoor recreation and fish and game elections, the voter turnout is similarly poor. Take a look at some recent Fish and Game elections where in some regions not enough nominations were received to fill the council seats!
The voting turnout by shooters and anglers was woefully low. It should be mentioned the voting system, thanks to government departments, discourages anglers and shooters to enrol as voters. 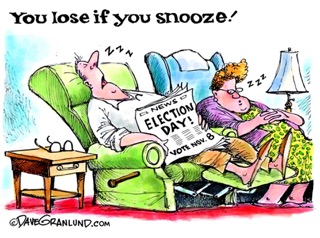 Automatic Voting
The matter of fish and game elections goes back a long way.
Acclimatisation societies naturally had major input into the draft 1990 Conservation Law Reform Bill which replaced Acclimatisation Societies with Fish and Game Councils. Going as far back as the 1960s and 1970s, Acclimatisation Societies urged the government to allow automatic membership, i.e. on buying a licence you were a member and had the right to vote. However it was blocked by the head office of Wildlife Service of Internal Affairs and in particular its director, the late Dr Gordon Williams.
It was suspected that the real reason was a paranoia by bureaucrats of the political clout it would give acclimatisation societies.
Therefore one would have thought in the drafting of the Conservation Act, giving the automatic vote on buying a licence, would have been a top priority inclusion?
As a parallel if you join a rugby, tennis, bowls or any sports organisation you don’t then have to apply a second time to vote at the AGM.
It could be argued that the Conservation Law Reform Act weakened the democratic system by rejecting annual elections and going to three yearly ones to copy Parliament – perhaps a dubious role model!
Gummy Watchdog
Fish and Game NZ is bound by statute to the Minister of Conservation and government. Consequently it is a toothless tiger.
Surely when the Fish and Game Council bill was drafted Acclimatisation heads then soon to become Fish and Game NZ, should have demanded political independence instead of being tied to the Minister of Conservation – and therefore the Department of Conservation’s apron strings?
The Department of Conservation is government-run and its environmental awareness is below par.
It advocates for and carries out massive 1080 poison drops killing native birds and game birds such as quail, chukar and pheasant and invertebrates.  Yet Fish nd Game NZ never protest at 1080 drops.
DOC seems disinterested in river flows yet those rivers are habitat for native fish as well as trout.  It is by law, entrusted to look after native aquatic life. But it stands mutely by, turning a blind eye to the fate of the public’s rivers.
So don’t depend on DOC or politicians. That leaves one other option – you.
Do you as a New Zealander care?
French Role Model
Well Kiwis could be like French people.
I recall reading a few years ago, an article by political commentator Chris Trotter recently put it, “French governments are frightened of the French people.”
“Any perceived threat to their rights—is met by the French people, with action – on the streets.”
In the outdoors the 1972 New Zealand election – 43 years ago – was a landmark one for action. The National government wanted to destroy Lake Manapouri in the “people’s national park” to give cheap, heavily discounted power to a corporate foreign consortium. The people rose up in anger and formed “Save Manapouri.”
The National government then wanted trout farming. The trout fishing public rose up in wrath.
Then government did a deal with a rich American to sell public land in Te Anau’s Upukerora valley for a luxury lodge to exploit fishing and hunting and lock Kiwis out. The NZ Deerstalkers’ Association rose up in wrath.
The result of the anger and action in 1972 was the National government was dumped in favour of Norman Kirk’s Labour one. Significantly Norman Kirk loved fishing and hunting and the outdoors.
Stand up!
The Kirk government promised to ban trout farming, save Manapouri from drowning and to dump the Upukerorora deal. Newspaper editorials such as the “NZ Herald” attributed the shock defeat of the National government to the outdoor sporting publics vote.
Fast forward 43 years, to 2020.
Voter turnout for the 2020 General Election was estimated to be 82.5% of those enrolled.
Eighteen percent – about one in five persons – far too many – did not vote.
This compares with a final 79.8% turnout of those enrolled in 2017.
In the outdoors the 1972 New Zealand election – 43 years ago – was a landmark one for action. Fast forward back to now.
Chris Trotter ended his column referred to earlier, with “it would seem the habit of revolution and the knack of frightening governments, are forgotten at the New Zealand people’s peril.”
Well I’m not advocating anarchy but at least take an active interest and vote.

Chris Trotter – “it would seem the habit of revolution and the knack of frightening governments, are forgotten at the New Zealand people’s peril.”

3 Responses to Don’t Let the Dreaded Disease Afflict you!