Farmlands at High risk from Pesticides.

Posted on 30-03-2021 by Guest
Source:- Daily Mail (Australia)
Nearly a third of the farmland around the world is at high risk of pesticide pollution, according to a new report.
Scientists in Australia examined how nearly 100 agricultural chemicals were used across 168 countries, to determine which pesticides surpassed recommended levels.
Pointing to ‘widespread global pesticide pollution risk,’ the research found 64 percent of agricultural land had levels of pesticide chemicals higher than what industry standards consider ‘no-effect concentrations.’
A third were considered high-risk, with pesticide levels more than 1,000 times higher than no-effect concentrations.
That includes over 60 percent of European farmland, which is treated with dangerous levels of herbicides, fungicides and insecticides.
The research team found that overall 64 percent of farmland around the world, or about 9.4 million square miles, had higher than recommended levels of at least one active ingredient.
Dizziness
Direct contact with pesticides can cause irritation, rashes, nausea, dizziness and diarrhea, while exposure to residue in food products has been linked to a myriad of ailments including Parkinson’s disease, lymphoma, and asthma.
There are several reasons why regions are focal points for agricultural pesticides, AFP reported, including excessive use or use of highly toxic varieties.
Cold temperatures may slow their breakdown, while heavy rains can lead to high levels of runoff contaminating waterways.
As demand for crops has soared, the use of commercial pesticides has increased exponentially to meet it, and Tang’s report builds on a growing body of research on these chemical’s impact.
Acid Rain
A study published in August found pesticides and fertilizers had overtaken fossil fuels as the largest human source of sulphur, a key component of acid rain .
It used to come primarily from coal-fired power plants but experts from the University of Colorado found that the increasing use of sulphur in farming is having a similar effect, even hundreds of miles from industrial centers.
Just going green might not be enough.  According to a report this month in the journal Environmental Science and Technology, pesticides can continue to affect the environment long after their use stops.
Researchers in Switzerland found residue from herbicides and fungicides in the soil at farms that went organic more than 20 years ago. 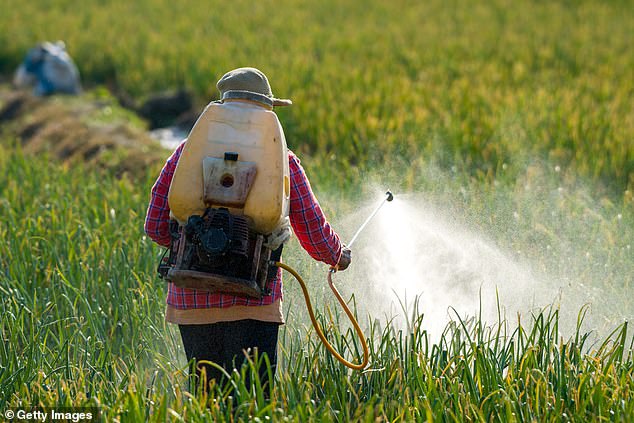 3 Responses to Farmlands at High risk from Pesticides.