Posted on 23-04-2021 by Guest
The Marlborough Recreational Fishers Association has written to government expressing deep concern about heavy depletion of kahawai along Marlborough’s coastline. In a letter to the Minister of Oceans and Fisheries David Parker, the association has called for kahawai to be classified and managed as a “recreational only” species.
“Kahawai have been labelled “the family fish” because everyone from nine years of age to ninety used to be able to catch a kahawai or several, at the river mouths such as the Diversion and Wairau Bar.  Kahawai often formed the basis for a family meal in the evening. As a fish to dine on, they are very underrated but appreciated by those who know them,” said Tony orman spokesman for the Marlborough Recreational Fishers’ Association.
The demise of kahawai around the northern end of the South Island is sadly very evident. Reports from other regions verify this view.
Experienced anglers recall kahawai years ago in Marlborough’s Cloudy Bay and the Marlborough Sounds working in several shoals just offshore, easily identifiable by excited gulls overhead. Today to see the birds hovering above the feeding frenzy of fish today is only seen very occasionally he said.
Vital to Ecosystem
Kahawai are a very important part of the ecosystem. A shoal of feeding kahawai, benefits several other species in the food chain. Gulls feed on scraps of bait fish which kahawai prey on. Kingfish are likely to feast on the kahawai. Below the surface activity, species such as snapper, tarakihi and others dine on the sinking scraps. Kahawai are an integral part of the food chain.

The association in its letter said the cause of the drastic decline in kahawai numbers is not hard to pinpoint as big commercial companies have wrecked the resource. Seiners surround the shoals offshore and scoop the fish up in their hundreds or thousands and use spotter planes to locate schools.

Tony Orman said he had heard of three first-hand accounts this summer  of seiners scooping up rare feeding shoals. The plundered kahawai are reportedly sent to Australia for crayfish pot bait. At one stage kahawai were apparently sent to Canada as pet food and ground up for fish meal.
Reports indicate they have been coloured orange and marketed as cheap salmon. Overall in commercial export terms, it is a very low value fishery.
Number One
Kahawai are very probably the number one recreational species to New Zealanders – a “family recreational fish” where everyone can have a ball at a river mouth fishing said Tony Orman.
“They are a most spectacular sports fish especially on light tackle. Overseas anglers especially saltwater fly fishers will travel the world to catch a sports fish. Bonefish for instance, draw US anglers to far flung places such as the Christmas Islands and the Indian Ocean’s Seychelles Islands. Kahawai could be New Zealand’s bonefish in the eyes of those wealthy US anglers. They could earn millions of dollars as a sports “tourist” fish and as Kiwi’s recreational fish.”
The kahawai is an excellent eating fish – an important aspect given the excessive price of sea fish in shops such as snapper at $40 -$50 a kg and blue cod at $60 a kg.  The New Zealand family can enjoy a feed of sea fish by catching a kahawai.
Recreational fishing has been neglected.  Bureaucrats too often have overlooked the significant contributions generated by marine recreational fishers and of the economic value of kahawai that could be gained, with sound management.
The Marlborough Recreational Fishers’ Association believes there is a very compelling argument in favour of making kahawai a “recreational only species,” said the letter to the minister. 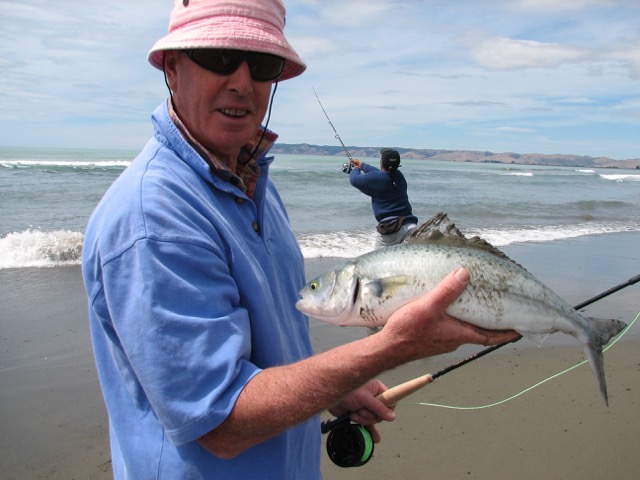 Tony Orman with a kahawai caught on fly fishing gear. Kahawai should be managed as a recreational only fish.