New Book on Fiordland Helicopter-Deer Days is a Great Read

Posted on 23-04-2021 by Guest
by Tony Orman
Dave Richardson of Marlborough has just written a mammoth book – 450 pages in all – about his hunting life that features accounts of his years hunting deer in Fiordland. It’s a great read about a man, a very remarkable hunter, jet boater and helicopter pilot.
Why did he pen the book which took years in compiling?
“It’s because a number of people urged me to write a book about my hunting years and particularly about Fiordland,” he says.
The saga of Fiordland became known as The Deer Wars, somewhat a misnomer in Dave’s opinion.
“It was survival of the experienced plus those who weren’t fool-hardy. Those who didn’t know how to hunt, seldom survived and left. A very few took crazy risks and didn’t survive,” is how Dave Richardson reflected on his years in the era known as the Deer Wars.
To some extent some men became addicted like adrenalin junkies – and they could be prone to take risks. Over 80 men died in the pursuit of deer and dollars and many more were injured. But that needed to be put in context said Dave Richardson.
“Similarly there’s accidents and fatalities with small aircraft and top dressing operations,” he points out. “Like any business, there were two contrasting types – the irresponsible cowboys and the sensible responsible operators.”
Dave Richardson survived a helicopter accident that was not due to taking an absurd risk but was simply due to bad aircraft maintenance.
“It was just aircraft engineers not doing their job properly,” he says now confined to the wheelchair as a result of the mishap.
“I always had in the back of my mind, my wife Jan and kids at home, so I didn’t take risks. Most were similarly sensible but yes a few others weren’t. After all it’s no different to drunken drivers being a blight on the majority of sensible motorists is it?”
Born in Central Hawkes Bay in the North Island Dave grew up at a tiny village called Tikokino in the late afternoon shadow of the Ruahine Ranges. In his schoolboy years Dave shot his first deer in the Ruahines and was hooked on hunting.
Care for Wapiti
In 1970, Dave and his wife Jan established a freezer operation where hunters could sell deer. With the welfare of the unique wapiti herd in mind, he openly encouraged hunters to kill selectively, i.e. shoot hybrid wapiti-red deer crosses and red deer and leave pure wapiti unharmed.
However the death knell for Fiordland’s wapiti came when live deer capture operations removed pure bred wapiti from the park. Three cabinet ministers had promised to save the wapiti herd but in Dave’s opinion, their assurances were hollow.
“The whole saga was a sham. In fact some government connected people allegedly got those pure bred wapiti put on their deer farms. It was arguably corrupt,” he reflects.
Underlying it was the seriously flawed National Parks Act which still outlaws “introduced species” such as wapiti, red deer and even trout.
“It’s about time we accepted some introduced species as valued,” he adds. “After all, all humans are introduced by migration and our essential farm animals are introduced.”
There was “slipshod” management with the wapiti. The helicopter industry was flawed with failure to enforce proper regulations while helicopter operators were forced to buy second hand parts, gear and helicopters.
Crazy Times
The deer war era was tumultuous with a loss of over 80 human lives plus many accidents such as Dave suffered. Despite the disorganised mismanagement, it was an exciting occupation to be in.
“Without a doubt, crazy as it seems, I’d do it again,” he smiles.
It’s all in his book “With Few Regrets” self published and available direct from Dave.
The book is big – 450 pages with plentiful photographs – and an absorbing insight into the “deer wars”, the mismanagement of wapiti and the politics involved. Using his personal diaries the author tells not only his story but also many of the people he worked withLiberally illustrated with photos it’s an excellent read.
“With Few Regrets” by Dave Richardson (self published) Price $60 plus $8 postage, total $68. Available from author, 9 Beatrice Place, Rarangi, Blenheim R.D. 7273. E mail contact <wekarich@xtra.co.nz> Payment by direct credit. 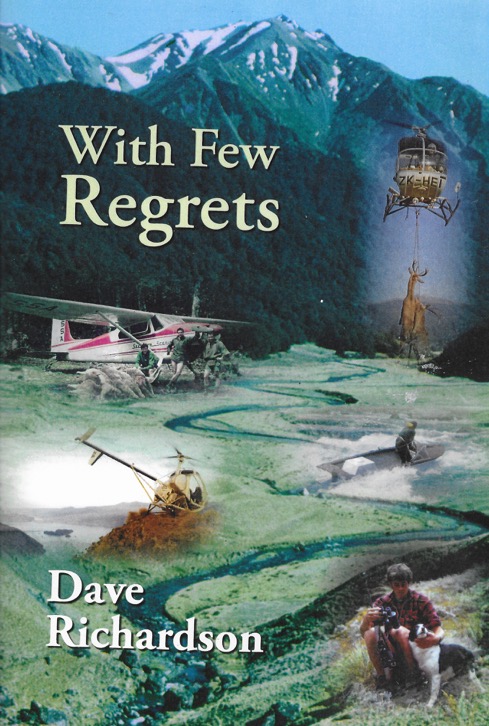