Posted on 18-11-2020 by Guest
Report by Hugh Francis
Opposition is swelling against government and local body plans to dowse the Tararua Ranges with 1080 poison.
Latest is opposition by a Horowhenua iwi to a 1080 drop by OSPRI. in the Tararua Range east of Levin. Opponents to the drop sanctioned by the Department of Conservation say they are not being listened to.
The operational area covers about 42,000 ha from the western side of the Tararua Range near Manakau to the eastern side of the Tararua Range near the  Wairarapa National Wildlife Centre at Mt Bruce.
Another 1080 operation by the Greater Wellington Regional Council is scheduled for the Tararua Ranges, east of Waikane.
But conservationists and scientists have strongly crticised the plans.
Scientist Jim Hilton said the long term effects of 1080 are disastrous.
DoC has been poisoning the land with 1080 for over 60 years and there is no peer reviewed evidence that it has done any good he said.
“On the contrary, there is plenty of research and anecdotal evidence to suggest that sodium fluoroacetate (1080), which was developed as an insecticide, has killed tens of thousands of birds and a major item of their diet – millions of insects.”
The interference of people in the ecosystem throws natural interactions out of balance added Jim Hilton.
Rat and Stoat Plagues
Conservationist Tony Orman who has personal knowledge of the Tararua Ranges from the 1950s, said the 1080 drops would severely disrupt ecological equilibrium.
Landcare Research studies showed surviving rats – usually about 20% and being super-prolific breeders –  exploded in numbers and within three to four years, numbers were four times pre-poison levels. Stoats preying on rats in turn mushroomed in numbers.
“All DOC and the Greater Wellington Council will achieve apart from birds killed, will be rat and stoat plagues. It is absolutely bizarre and irresponsible by DOC, OSPRI and the Greater Wellington Council,” he added.
Scientist Jim Hilton described use of aerial poisons like 1080 as “an expensive exercise in futility, financially unsustainable, ecologically unsustainable and not doing the job of saving species at all. It is killing them, some faster than others.”
Maori iwi have joined in the opposition.
Hapū of Horowhenua iwi Muaūpoko are questioning the value of consultation after a recent hui with the Department of Conservation (DoC) ahead of a planned drop of 1080 poison in the Tararua Ranges.
DOC Not Listening?
More than 60 people from different Muaūpoko hapū attended the meeting in Levin Memorial Hall earlier this month at the invitation of DoC and its Project Kaka partners OSPRI.
According to reports, those at the Levin hui listened and engaged with DoC and OSPRI representatives but following the hui were unanimously opposed to the 1080 aerial poisoning.
Vivienne Taueki said she questioned the value of consultation and believed DoC was going to forge ahead with the 1080 plans regardless of any concerns raised at the meeting.
“We are not being listened to,” she said.
“It reflects the attitudes on where our interests lie.”
Vivinene Taueki said it had now forced members of the iwi into a reactive position where they were now considering applying for an injunction to have the planned 1080 poison drop stopped.
Trapping Viable?
Another attendee said people had been pushed into the background by censorship and by a government that does not want the public to know what [1080] is doing.
Waikanae local Aaron Kerr has lived in the area all his life and trapped and hunted in the Tararua ranges for 30 years, including time spent living in the bush. He said trapping is a far better solution to eradicating possums than poison.
Tony Orman said it was very questionable the possum was a pest. It was proven in 2016 from figures the then Minster of Primary Industries supplied in Parliament that Tb infection of possums is virtually zero. In addition New Zealand’s bovine Tb infection rates are so low, way below World Health Organisation yardstick, that New Zealand was one of the most Tb free countries in the world.
Possum Not a Predator
“As for foliage impact. Landcare Research told DOC many years ago, that the possum browses only a very minor percentage of the national forest’s foliage production. The DOC notion of a herbivore possum preying on birds and eggs has been thoroughly debunked. It’s so ridiculous as to be absurd,” he added.
But offialdom seems deaf.
The Greater Wellington Regional Council’s Catchment General Manager, Wayne O’Donnell said “If we leave them (possums) unchecked we will see significant degradation of the forest environment and the habitats it provides for a wide range of regionally and nationally significant native plants, birds and animals”.
© Aerial 1080 – opposition strong but government deaf? 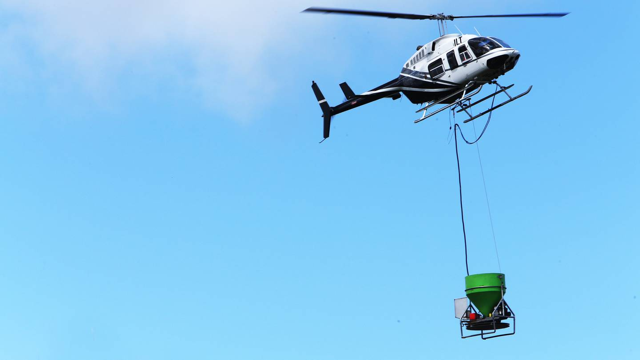