“We made a National Park disappear”

Those are the words of the Te Urewera chairman, Tamati Kruger – or as his iwi call him, King Tut.

The recent High Court ruling last week that ordered an immediate halt to the burning of the huts in Te Urewera revealed some astonishing detail about what has gone wrong with the co-governance arrangements that were agreed in 2014.
The principal iwi negotiator for Tūhoe at the time was Tamati Kruger. Since then, he has gone on to be the chairman of Te Uru Taumatua (TUT), the Tūhoe governance body for Te Urewera. Kruger is a divisive figure – even within Tūhoe. In fact, the applicant for the emergency injunction to stop the huts being destroyed – Wharenui Clyde Tuna – is Tūhoe himself.
One of the revelations to emerge from last week’s injunction was that the Department of Conservation and TUT had not agreed their annual operational plan as required by the Te Urewera Act. Key GovernmentThat is primarily down to the fact that Kruger – the Tūhoe strongman installed by John Key’s government – has refused to engage with the department for the last two years.
When granting the injunction, the judge noted that in the absence of an operational plan, a condition of the lawful demolition of the structures has not been met and, accordingly, such demolition would be unlawful. Given that the Act confers legal personality on Te Urewera, emerging international jurisprudence on this issue suggests that if the former national park suffers harm then it (or someone acting on its behalf) is able to sue those individuals and bodies that are responsible for that harm.
While Kruger has been in the news recently, his more incendiary public statements over the past few years have gone largely unreported.
In 2019, for instance, he delivered a speech to the Ministry of Health Forum that included the matter-of-fact claim: I represent the iwi Tūhoe located around Te Urewera area. We created a miracle some five years ago, we made a National Park disappear.
In fact, it’s not the first time that Kruger has made the boast. Two years earlier, at the annual Bruce Jesson Memorial Lecture at the University of Auckland he made a similar claim. But that is not the only statement that makes his Bruce Jesson Lecture noteworthy. Indeed it provides an interesting and revealing insight into the individual who negotiated the Te Urewera settlement with the John Key government, and brings into question the judgment of the leading players in that negotiation. For truth be told, this was, and remains, a mess of National’s making.
Finlayson’s FollyThe former Attorney-General, Chris Finlayson, is not shy in taking credit for his role in the settlement. Since then of course the partnership between Crown and iwi has totally disintegrated.
In April, Kruger told Q+A’s Whena Owen, “The Department of Conservation and Tūhoe, they do come from different places – ideologies, philosophies, culture, language, practice – and so in the seven years we have found the collision points of those, and we’ve tried our very best, both parties, to work those things out.”
Within the department, the deputy director-general responsible for running the Tūhoe relationship until six months ago was Mervyn English – older brother of Bill. And sitting on the TUT board, collecting his director’s fees whilst this mess unfolds – the Right Honorable James Bolger.
Bolger’s BungleIn 2016, Bolger spoke optimistically about the settlement process and the unique arrangements that had been agreed with respect to Te Urewera, saying “I think we’re doing some good. I could argue that we could do better or go faster. But, in some respects, speed shouldn’t be an issue. That’s something I’ve learned from interacting with Māori, Māori leadership. It’s getting it right that’s the important issue.”
But seven years on from that statement, does Bolger still believe that TUT is getting it right? A significant number of Tūhoe do not believe that the current arrangements are working. Increasingly the public is starting to ask questions, and as of last week, the High Court demanded a halt to the hut destruction because it considered that Mr. Tuna has raised important issues of merit that require further consideration.
Sit BackWhy is it that these National Party old boys are happy to sit by and trust Kruger, when so many stakeholders, including his own Tūhoe iwi, are loudly questioning his governance style and calling for his removal?
In April 2021, it was reported that Tūhoe artist and activist Tame Iti was calling for the resignation of Kruger with a protest raising concerns over the iwi’s leadership after months of growing tension.
Those calls have only grown louder. A few weeks ago, Tūhoe elder, Paki Nikora spoke to Waatea News and described “the desecration of the huts” at the hands of Kruger – a leader who Nikora calls “King Tut”.
Reading Kruger’s Bruce Jesson Memorial Lecture, albeit with the benefit of hindsight, what did National think would happen when they entrusted the largest national park in the North Island to Kruger?
Indeed Kruger appears to have a dim view of government and the limited role that they might play in the management of the land. So there we have it. King Tut – a local strongman installed and supported by central government against the wishes of his own iwi, Tūhoe.
And like any strongman, he ended his speech with an example of his dictatorial style of leadership, using the phrase “Koia mārika” which was the title of his lecture, “So Shall It Be.” 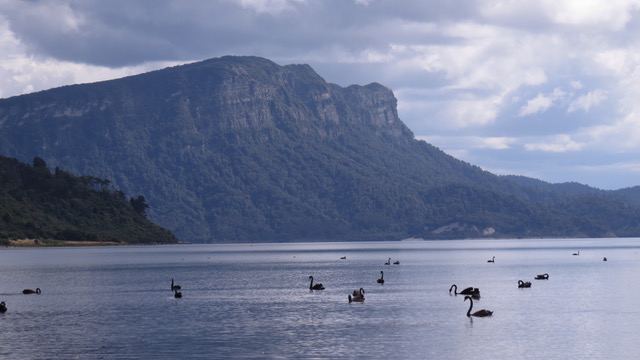